Since May, when Covid-19 was contained in Vietnam, Vietnam Airlines has opened 22 more air routes, raising the total number of domestic routes in its network to 61. On peak days, the national flag air carrier provides nearly 500 domestic flights. 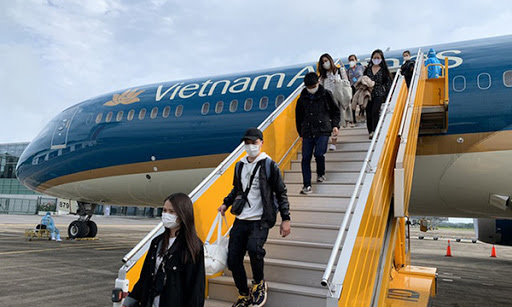 The two latest air routes which Vietnam Airlines has opened are Hai Phong – Dien Bien and Da Nang – Phu Quoc. It has resumed two other routes, including Can Tho – Phu Quoc and Da Nang – Van Don.

The air routes opened by air carriers before were mostly niche ones, which connect tourism points. The strategy can ease overloading at Tan Son Nhat and Noi Bai Airports, where runways are neing repaired.

Bamboo Airways has announced the opening of three more air routes from Da Nang to Da Lat, Can Tho and Vinh, commencing in late July.

Prior to that, it began providing short-distance flights on Thanh Hoa – Phu Quoc and Thanh Hoa – Quy Nhon routes.

According to Bamboo Airways’ CEO Dang Tat Thang, the revenue from the domestic market is the major source of income for the airline.

“The aviation sector now acts as the pioneer, paving the way for other business fields to regain their development,” Thang said.

According to Duong Tri Thanh, CEO of Vietnam Airlines, the carrier’s cash flow has gradually recovered thanks to the opening of new domestic air routes. It made over VND1 trillion over the last two months.

However, Thanh still is worried about the prospects of the airline as it cannot ‘stand on one foot’ in the long term (it can earn money only from domestic flights, and still cannot provide international flights).

The number of passengers flying with Vietnam Airlines has increased by 34 percent, but the revenue still has declined, because most of the flights are short-distance with low airfares.

At this time, the number of passengers booking domestic flights is very high, because students have entered their summer holiday. However, the demand may fall in the fourth quarter.

Analysts say that the competition on domestic air routes is high as airlines are using aircraft for domestic flights to avoid leaving aircraft idle.

Will SCIC invest in Vietnam Airlines?