It is still unclear who will take over the Auchan chain in Vietnam, though the announcement about the departure was made many days ago.

A question has been raised why Auchan has closed most of its supermarkets in Vietnam, though negotiations and transfer process have not finished. 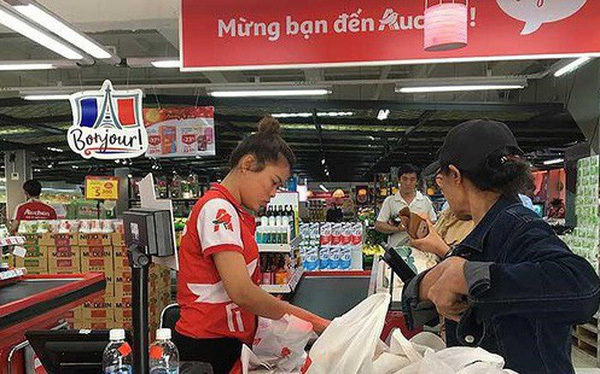 On June 3, Auchan Vietnam officially announced the closure of 15 out of 18 supermarkets in HCMC, Tay Ninh and Hanoi.

After five years of presence in Vietnam, only three supermarkets in HCMC will stay, including two in district 7 – Auchan Crescent Mall and Auchan Era, and the other in Tan Binh District – Auchan Hoang Van Thu.

However, Phap Luat TP HCM quoted its sources as reporting that Auchan Hoang Van Thu would leave the market in October.

Vu Thi Kim Nuong of Auchan Vietnam told the local press that Auchan and partners are still under negotiations about the transfer.

A branding expert said in general brand owners only make announcements about the departure after they transfer all their assets (retail premises, goods and staff) to new owners. If doing this, they can sell for better prices, while the transfer will be smooth.

The transfer of Big C from French Casino Group to Thai Central Group, worth $1.05 billion, is an example.

However, Auchan has gone another way. It reported losses, liquidated goods and closed down 15 of 18 supermarkets though the negotiations have not yet finished, and the new owner has not been found.

Explaining this, Nuong said if Auchan Vietnam maintains the operation of supermarkets until the negotiations finish, which may take several months, Auchan may have to incur bigger losses.

However, Vietnamese businesses still said that the actions taken by Auchan were ‘abnormal’.

“Leaders of Auchan in France said Auchan’s retail in Italy will be transferred to Conad, an Italian retail group. Why doesn’t it do the same thing with its supermarkets in Vietnam?” a businessman questioned.

“Is this because Auchan only wants to sell its brand, not its assets?” he said.

He went on to say that after the inventory liquidation, Auchan now only has the brand in Vietnam. This means that f a retailer buys Auchan, it will only buy the Auchan brand.

Tran Phuoc Tuan, HR Director of Auchan, confirmed that the liquidation before transfer aims to ease the financial burden. However, he oukdnot say if they were selling the brand name only.

Auchan arrived in Vietnam in 2015 and employs 1,000 workers. The French retail chain once stated it would open 300 supermarkets in Vietnam within four years.

A representative from Supermarket giant Auchan Vietnam expressed shock at what they described as shameful behaviour customers at a recent sale at its stores.

French supermarket group Auchan Retail will temporarily keep its three HCMC-based supermarkets in service while 15 others will be shut down nationwide, said Auchan’s communications director.