The seafood sector witnessed unsatisfactory business results in the first nine months of the year as a number of big companies reported sharp declines in profits in comparison with the same period last year.

Hung Vuong Seafood JSC (HVG) reported revenue of VND3.951 trillion for the 2018-2019 fiscal year which ended on September 30, a sharp decrease of 52 percent compared with the last year. 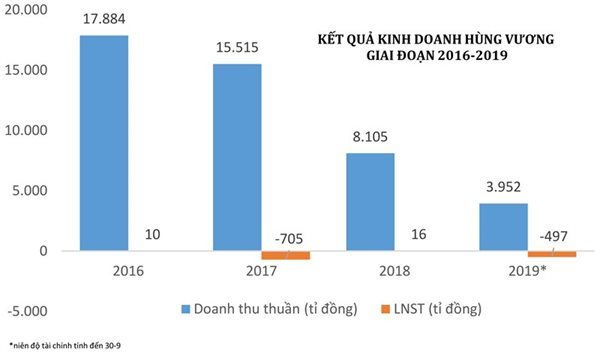 The big player in the seafood industry reported post-tax profit of minus VND476 billion for the holding company, while it made a profit of VND16 billion the same period last year, thus raising the accumulative loss of VND892 billion.

HVG is not the only seafood company which cannot sell products. Vinh Hoan JSC (VHC), the leading catfish processing company in Dong Thap, which has the highest market share price in the industry, also reported unsatisfactory business results.

Explaining this, the company said the sale output and the average sale price had decreased. Prior to that, ACB Securities commented that the result was anticipated as the demand from the US, which is VHC’s major market, was on the decrease. In the third quarter of 2019 alone, VHC’s revenue decreased by 25.5 percent compared with the same period last year.

Minh Phu, called the ‘Shrimp King’, reported that profit in the first nine months of the year was VND484 billion, a 9.7 percent decrease compared with the same period last year. Prior to that, its Q2 reported showed profit decreasing by 66 percent. The company said the profit went down because it had to buy materials at higher prices.

The seafood sector has been facing difficulties since the beginning of the year. According to the General Department of Customs (GDC), by the end of October 15, 2019, Vietnam’s seafood export turnover had reached $6.58 billion, a decrease of 2.4 percent compared with the same period last year.

The sector had a prosperous period in 2017-2018, when most seafood companies reported big profit. In that period, seafood companies’ shares saw prices increasing sharply as people had confidence in the bright prospect of the industry when many FTAs were being signed to pave the way for seafood exports.

However, since the beginning of 2019, the share prices have decreased significantly. Even VHC, which had the highest market share price, also had to buy treasury stocks to keep the prices stable.

“The demand for catfish in the world market keeps increasing. Chinese seafood now has been taxed by the US, which brings opportunities to Vietnam’s catfish in particular and Vietnam’s seafood industry in general,” Bao Viet reported.

Lack of production materials and flagging export value have caused seafood companies to suffer losses in the third quarter of this year.