The cashew industry had just overcome the crisis in late 2018 and early 2019 when it was dealt another blow from Covid-19.

Analysts predict a bad year for cashew growers and exporters. China has initially succeeded in controlling Covid-19, but the epidemic has been escalating all over the world, including the US and Europe. 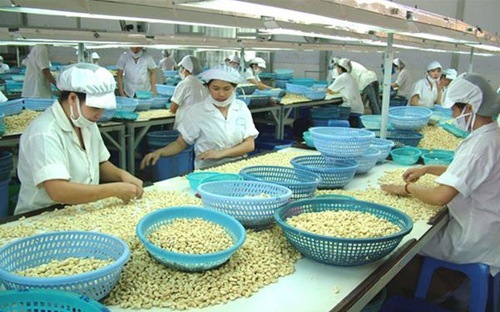 Low demand from target markets and short supply of input materials from Africa, the major material supply sources, both have caused difficulties for Vietnamese enterprises.

A bulletin released by units of the Ministry of Agriculture and Rural Development (MARD) showed that Vietnam exported 35,000 tons of cashew nuts in March, worth $252 million, and 86,000 tons in the first three months of the year, valued at $609 million. This represented an 8.2 percent increase in quantity but 4.7 percent decrease in value compared with Q1 2019.

The US, Netherlands and China were still the three biggest import markets, which consumed 35.4 percent, 12 percent and 6.1 percent, respectively, of total exports.

The sharpest increase in export value has been reported for Saudi Arabia (2.54 times) and the sharpest decrease for China (61 percent). The average export price in the first two months of the year was $7,046 per ton, down by 14 percent.

In the domestic market, farmers in Binh Phuoc and Dong Nai saw sharp price falls. A farmer in Dong Nai province said the raw cashew nut price was VND25,000-26,000 per kilogram earlier this crop, but it dropped VND21,000 in February and VND20,000 in March. The price continued to fall to VND14,000 in mid-April.

The bulletin of the Import/Export Department under the Ministry of Industry and Trade (MOIT) released on March 31 showed decreases in output, quality and price of this cashew crop in Ba Ria – Vung Tau. As the weather conditions were bad, the yield and the quality were low.

There are over 8,000 cashew growing area in the province, mostly located in the districts of Chau Duc and Xuyen Moc. However, the output is on the decrease because cashew plants are getting old and the profit is low.

In Dong Nai province, the cashew growing area is decreasing considerably because the cashew nut price continues to decrease, thus bringing low profits to farmers compared with other crops.

According to Pham Van Cong, chair of the Vietnam Cashew Association (Vinacas), the plan on exporting $4 billion worth of cashew nuts this year may fail. Cong personally things Vietnam can only earn $3 billion from cashew nut exports this year.

The Import/Export Department has advised enterprises to keep a close watch over the epidemic situation to design reasonable production and business plans.

Cashew exports are expected to surge in the latter half of the year once the COVID-19 pandemic dies down.