After the lending model collapsed in China, many P2P lenders flocked to Vietnam to seek opportunities in the country.

According to the Department of Competition and Consumer Protection under the Ministry of Industry and Trade (MOIT), lending via apps has been growing rapidly in both number of clients and disbursement value, which has led to an increase in complaints from this type of financial service. 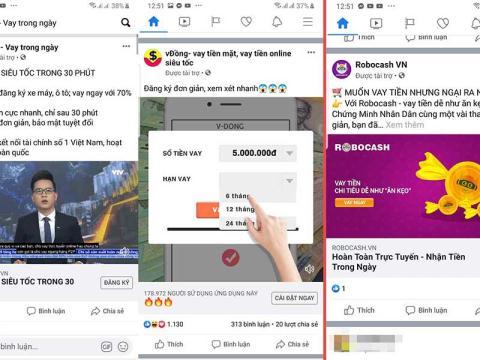 The agency has given warnings that there are many disguises from P2P lending. Many consultancy firms join forces with pawn companies to lend money at exorbitant interest rates.

Phap Luat TP HCM, which conducted a survey, found that there are numerous lending apps, but it is very difficult to track down where they are from. The apps, such as ruby.cashiz.com, akulaku.vn, atome.vn and uvay.vn don’t show any information about them, but only guide users on how to download app, what procedures borrowers have to follow, and advertise their services (low interest rates, convenient procedures and quick disbursement).

According to the newspaper, when accessing alivay.com, one can see some words that introduce the service of lending money through borrowers’ identity cards. There is no information in other columns. There are only Chinese words.

Meanwhile, TicTic was introduced as developed by Fantuan Technology Co Ltd which has the address at No 2 Lane 31, Dich Vong Street, Cau Giay District, Hanoi. In the ‘Introduction’ column, the company shows that it cooperates with CITIC Bank in China, Yuheng Law Firm and some other Chinese institutions. This means that TicTic has close relations with Chinese investors.

Phap Luat TP HCM believes that there are a number of lending companies owned by Chinese but registered as Vietnamese companies.

Prior to that, president of NextTech Nguyen Hoa Binh said about 60-70 Chinese lenders flocked to Vietnam after the business model collapsed in China.

Lawyer Truong Thanh Duc doesn’t specify the exact number, but estimates that 50 percent of apps that borrow money are sourced from China.

In many countries, the business model has been exploited to cause socio-economic instability. Instead of acting as intermediaries, many companies swindle clients and appropriate capital.

According to SBV’s Deputy Governor Nguyen Kim Anh, the problems can be seen most clearly in China and Southeast Asia. As the Chinese government has tightened management over P2P, Chinese companies have flocked to neighboring countries, including Vietnam.

SBV reported at a meeting that of 40 P2P lending companies operational in Vietnam. 10 are from China, and some from Indonesia and Singapore.

In early November 2019, the Ministry of Public Security investigated a case of lending money via app at the exorbitant interest rate of 1,600 percent per annum.

Allowing the "embedding" of fintech solutions into the ebanking app, banks may join the race to become "all-in-one" apps.