Now is the time when enterprises are feeling the ‘brutality’ of the Covid-19 epidemic. They have had to lay off many workers as they cannot maintain production and have received no orders.

In a small alley on Pham Chieu street in Go Vap District in HCM City, behind a deserted cemetery, there are tens of rented rooms where workers of Hue Phong Footwear Company live. 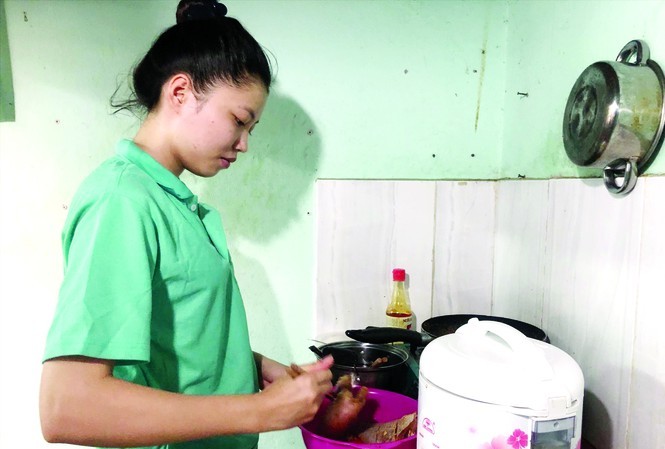 “I was at my usual working shift when I received a notice about dismissal, commencing May 15,” Tham told reporters.

“When I found my name on the list of workers to be laid off, I felt so worried. I don’t know how to overcome this,” Tham said.

The young woman has been working for Hue Phong for three years and earns VND6-7 million a month. When the epidemic broke out, Tham’s income dropped to VND5 million. However, the amount of money still helped her live in HCM City. Now that she has been laid off, a more difficult time is ahead.

Ngo Thi Thu, 26, from Dak Lak province, is luckier than Tham as she has not been ‘blacklisted’, but has been living in constant anxiety.

Thu graduated from a pedagogical school, but she could not find a job in HCM City and decided to work as a factory worker.

Having lived for four years in HCM City, she has never felt so worried about life.

“Many friends of mine have also become jobless," she said.

The labor contract of Tran Thi Anh Chi, 26, will expire in October, but New Vision, the company where she works, told her to stop working in mid-May.

Chi said the company unilaterally terminated the labor contract, but Chi had to write a letter of resignation and did not get an allowance for the dismissal, though she is raising a child less than 36 months old.

Nguyen Thi Bach Yen, chair of the Go Vap district Labor Union, said Hue Phong Footwear is the biggest enterprise in the locality with 4,700 workers. Because of the sharp fall in orders during the pandemic, the company has had to scale down production and cut 2,200 workers.

“We have contacted other enterprises and asked them to receive the redundant workers. Ten enterprises have agreed to employ them,” Yen said.

Pham Xuan Hong, chair of the HCM City Association of Garments, Textiles, Embroidery and Knitting, confirmed that garment and footwear companies are facing serious difficulties because export markets have not returned to normal.

Labor market freezes due to Covid-19

Large companies are not recruiting workers, while small and medium enterprises (SMEs) are laying off workers as they cannot maintain a big staff during the Covid-19 crisis.