Domestic firms pick up on Industry 4.0

A slew of domestic businesses have taken over specific solutions to seize imminent opportunities emerging from the Fourth Industrial Revolution (IR 4.0).

Most of Vietnamese enterprises make sense of the significance of applying IR 4.0 technologies into their production and business. 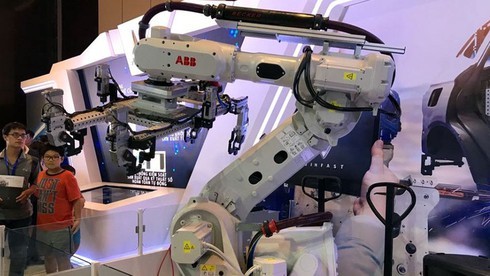 Vu Thi Van Phuong, General Director of VietRAP Investment JSC said that Industry 4.0 gears towards a faster and smarter production process that allows manufacturers to save their time and costs.

“Information technology, the internet, artificial intelligence and other new technologies have helped enterprises enjoy fast growth with their products sold at better quality and competitive prices. Making investment in applying cutting-edge technologies to tap into opportunities from Industry 4.0 is no longer an option but a matter of survival. Firms need to be proactive in training and retraining employees and workers so that they are able to update and benefit from positive changes from Industry 4.0,” said Phuong.

Meanwhile, Hoang Viet Hong, Deputy General Director of Industrial Machinery and Instruments Holding noted that the application of robotics and automation technologies into production has been increasingly intensified around the world.

This brings great effects on the Vietnamese economy, opening up astounding chances for domestic firms to achieve greater penetration into Industry 4.0.

Hong added that the increasing application of robots into production can help manufacturers deal with the disruption of labour or a lack of labour force and increase their productivity.

Tran Dinh Nhan, General Director of the State-owned Vietnam Electricity group (EVN) said that EVN, with the aim of turning itself into the leading corporation in the region, has approved a project on researching, developing and applying IR 4.0 technologies into its production and business activities since 2018. In 2019, EVN adopted 13 out of 40 component projects while some of them has been implemented effectively, with a focus on enhancing the digitalization of grid technical management and developing smart grids.

"More attention has been paid to applying new technologies into the group’s operations in order to improve operational reliability and labor productivity. EVN has put into operation 57 control centers and performed remote control for 625 substations of 220-110kV without staff on duty. The rate of issuing electronic documents and digital signatures via the internet in many subsidiaries amounted to over 80 percent, thus shortening time and costs," Nhan stressed.

He added, EVN is deploying its e-cabinet system to digitize more than 90 percent of its operation processes. The digital transformation of EVN has posted over 50 percent, which is due for basic completion by 2025.

Enterprises’ capacity of accessing IR 4.0 technologies in Vietnam remains large, but many still make no sense of the nature of Industry 4.0 and do not know how to utilize it. Though small and medium-sized enterprises acknowledge the Internet of Things (IoT) and related applications, they do not know which applications should be used and where to start.

Hong claimed that many businesses want to promote the application of modern technologies and need more robots to serve their production, but they still face many difficulties in ensuring human resources and investment capital for installing them.

Hence, he underscored the need of building up closer links between foreign and domestic experts to study and launch new and automated technologies into local manufacturing processes. So, the research and investment of such technologies must be strengthened in the near future, he added.

Nguyen Duc Thanh, head of the Vietnam Institute for Economic and Policy Research (VEPR), asserted that in order to reap big successes from Industry 4.0, Vietnam strongly needs to build a solid legal system for the digital transformation as it would be extremely dangerous and chaotic once digital resources are infringed upon.

Do Cao Bao, head of the tech giant FPT's Personnel Committee noted that in order to keep up with Industry 4.0, countries, including Vietnam should keep pace with ever-changing technologies while defining local advantages and understanding its market to create products suitable for tastes, not for manufacturers, thus helping them make deeper penetration into their target markets.