The latest report of the Ministry of Industry and Trade (MOIT) on solutions to develop power generation sources by 2030 shows that electricity production growth in 2011-2019 was 10.1 percent per annum, and the electrical merchandise growth rate was 10.5 percent, while the maximum load capacity (Pmax) in 2019 was 38,249 MW. 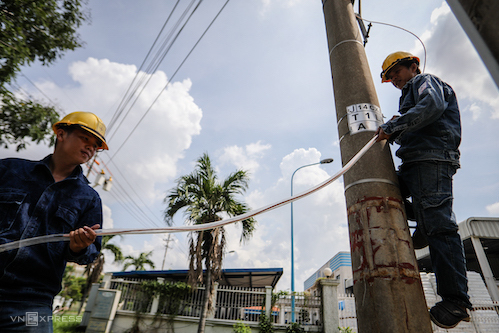 The average growth rate of power sources in 2011-2015 reached 13 percent per annum, of which the coal-fired power growth rate was the highest at 27 percent per annum, followed by hydropower with 15 percent and renewably energy with 37 percent. However, because of the small installation capacity, renewably energy just accounted for 0.2 percent in 2015.

This was because hydropower potential was nearly fully exploited, while it was difficult to build coal-fired power plants.

Meanwhile, this period witnessed a boom in the number and capacity of renewable energy projects.

As of the end of August, the total capacity of renewable energy had reached 6,000 MW, including 5,245 MW of solar power, 450 MW of wind power, 325 MW of biomass power, and 10 MW of electricity generated from solid waste. Besides, there have been 47,000 rooftop solar power systems installed with total capacity of 1,000 MW.

Under the adjusted national seventh electricity development plan (Plan 7), Vietnam needs to put 96,500 MW of power into operation within 15 years, from 2016 to 2030, or 6,430 MW a year, in order to satisfy power demand for socio-economic development.

However, power generation projects have been going slowly, thus threatening to affect the electricity supply plan.

Under Plan 7, as many as 116 power generation projects need to be invested and put into operation, not including renewable energy projects. But after four years of implementation, many projects have not been implemented.

According to MOIT, because of Covid-19, the additional demand in the time to come will be lower than previously predicted.

However, as projects have been going slowly, an electricity shortage risk will still exist in 2021-2025, the period which will see big changes in the power source structure.

MOIT has suggested a series of solutions to prevent an electricity shortage.

Fourth, building a transmission network to use up power capacity. Fifth, applying policies to encourage the effective use of electricity.