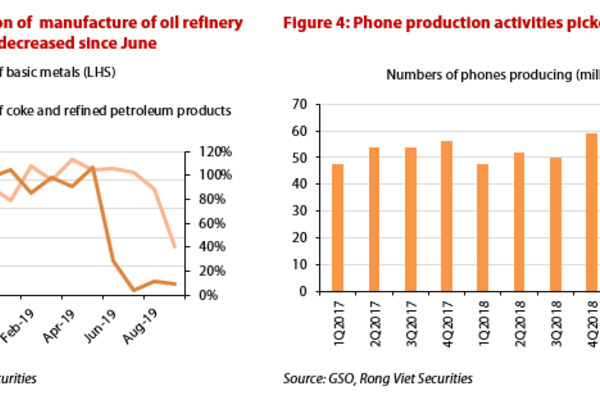 The last time the month-on-month industrial production index (IPI) fell and the headline Nikkei Vietnam Manufacturing Purchasing Managers’ index (PMI) was as low as 50.5 in September, GDP growth of the first and second quarters in 2019 slowed to 5.5%, according to Viet Dragon Securities Company (VDSC).

This was despite the fact that Vietnam’s economy grew strongly in the third quarter, making nine-month GDP growth recording its best reading in nine years at 6.98%.

During this period, although mining and quarrying activities continued to decline, total industry still maintained its pace thanks to manufacturing activities.

Manufacture of computer, electronic and optical products contributed significantly. At the same time, there was a strong pick up in export of phones and parts in the third quarter. 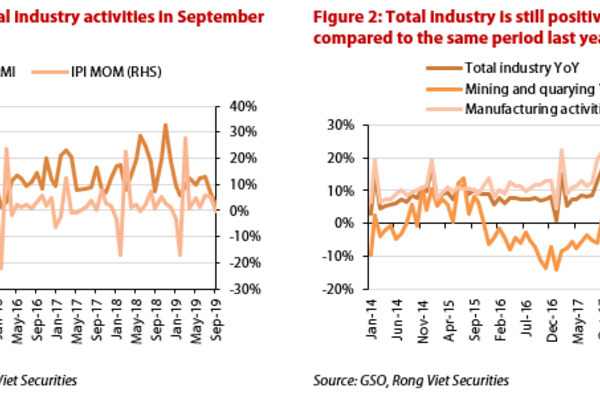 According to VDSC, a decrease in PMI and IPI MoM in September were not a big concern now due to a high industrial activities in August.

Moreover, the GDP growth in the third quarter was still positive. However, the brokerage suggested the government watch closely these two indices.

Because the last time IPI m-o-m fell and PMI were this low, GDP growth rate of the first and second quarters in 2016 was only about 5.5%.

Furthermore, manufacturing activities from the Nghi Son refinery and Formosa steel mill in central Vietnam bolstered headline results in the first half of 2019.

However, Samsung manufacturing activities replaced these two to contribute the most in the third quarter, mainly because the South Korean tech giant released new products during this period.
​
Hence, as the contribution of Nghi Son and Formosa will not be as significant in the fourth quarter as in the first half of the year, October data is expected to give more clues on whether Samsung can keep its pace or what kind of activities are going to support total industrial activity in the final quarter of 2019, stated VDSC. Hanoitimes

Vietnam’s GDP back on 7% track with manufacturing and services

Vietnam’s growth is exceeding expectations, prompting economists and researchers to revise forecasts for the nation in the near term, while remaining cautious due to fears of a global economic recession.

On-spot exports are now not subject to duty exemption, possibly derailing the recovery of textile and footwear companies.

The nearly decade-long war for power at the Vietnam Export Import Commercial Joint Stock Bank (Eximbank) may be coming to an end.