Though they were warned beforehand, farmers are still unable to satisfy requirements, and their produce has been rejected by China.

Nguyen Van Thinh, deputy chair of Nui Thanh district in Quang Nam province, said that 930 tones of dried octopus had been left unsold, including 800 tons on fishermen’s boats and 130 tons kept by merchants. 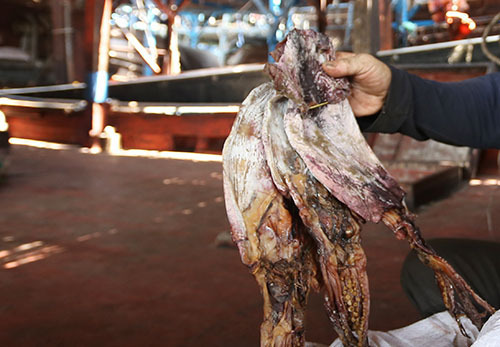 The unsold products are mostly muc xa (Sthenoteuthis oualaniensis) caught near the shore in Hoang Sa and Truong Sa seas.

Previously, octopus was exported to China across border gate. However, China now only accepts imports through official channels and requires traceability. As a result, octopus stock remains unsold.

Vietnam’s farm produce such as jackfruit and durian are also getting stuck on the way to China because of China’s changes in import policy.

To boost sales, Lam Dong farmers have to sell products along Highway 20 to travelers or send to HCMC for retail sale because merchants refuse to accept durian.

As for jackfruit, the price of first-class products in Chau Thanh district of Hau Giang province has dropped to VND18,000 from the peak of VND70,000-80,000 per kilogram. Second- and third-class jackfruits are cheaper, just VND10,000 and VND5,000, respectively.

The warnings about the changes in Chinese import policy were given in early 2018. However, farmers did not pay appropriate attention to this information.

Meanwhile, Lai The Hung from the Lam Dong Department of Crop Production & Food Protection admitted that the origin stamping on farm produce has been going slowly.

The stamping on Da Huoai durian that meets VietGap standards, for example, only began recently. Of 300 tons of durian in the district, only 88 households have registered to cultivate the fruit in accordance with VietGap standards, and only 800,000 stamps have been used.

Meanwhile, the provincial agriculture department found that many households did not observe the process and misused plant protection chemicals.

Nguyen Van Kiet, head of the agriculture sub-department in Chau Thanh district, admitted that jackfruit in the locality remains unsold because sales depend on the Chinese market.

Two years ago, Chinese businesses flocked to Vietnam to collect jackfruit, prompting farmers to grow the fruit, raising the cultivation area by 2,000 hectares. As China has tightened imports across border gates, jackfruits remain unsold, and farmers have had to pay a heavy price for their lack of information.

Vietnam and the European Union (EU) last week signed a landmark free trade deal that will slash tariffs on almost all goods, including wood and timber products.