Despite the recent resurgence of the COVID-19 pandemic, the majority of foreign businesses remain optimistic for 2021 with some expansion plans. 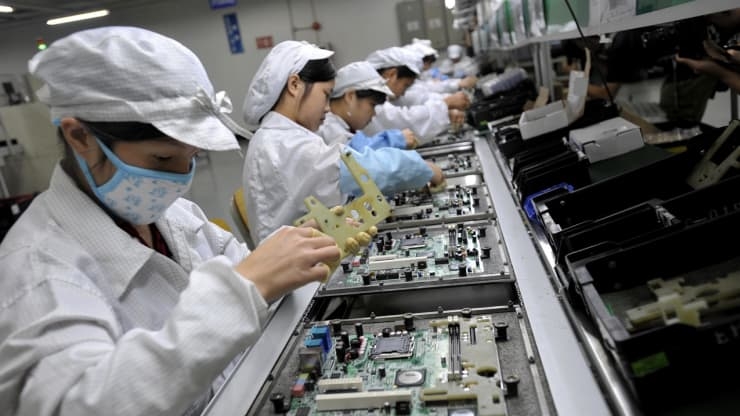 Foreign investor Foxconn Singapore Pte., Ltd. has recently decided to pour an additional $23 million into the Fukang Technology Factory in the northern province of Bac Ninh, bringing the total investment capital of this project to $293 million. The project was granted investment licenses in mid-January.

Foxconn is recruiting 1,000 electronic assembly workers for its factories in Vietnam. Workers will work at the industrial parks (IP) of Dinh Tram, Quang Chau, and Van Trung in Bac Giang and Que Vo IP in Bac Ninh. Besides, the company is recruiting 14 supplier quality engineers.

According to Zhuo Xianhong, general director of Foxconn in Vietnam, the Taiwanese electronics contract manufacturer has invested $1.5 billion in Vietnam, including $900 million in the northern province of Bac Giang alone, creating jobs for over 35,000 local workers. It aims to pour an additional $700 million and create 10,000 jobs in the country this year.

The growing investment and recruitment activities are part of Foxconn’s plan to ramp up production in Vietnam. It also highlights the attractiveness of the local market to foreign investors despite the ongoing COVID-19 pandemic.

Uyen Ho, public affairs director of Intel Products Vietnam said that global companies have been present in Vietnam already. They will continue to consider Vietnam as a destination for expanding their businesses. The trend has been further reinforced by the government’s management of the COVID-19 pandemic.

She noted that big US companies, which already set up operations in Vietnam, are considering to expand business in the country. In January, Intel has announced to expand its investment by $475 million in Intel Products Vietnam (IPV). This takes Intel’s total investment in its Vietnam facility to $1.5 billion. Other high-tech companies are considering to invest in Vietnam following the examples of Intel and Samsung.

According to data by the Foreign Investment Agency under the Ministry of Planning and Investment, the foreign direct investment (FDI) capital into Vietnam reached $5.46 billion in January and February, equaling 84.4 per cent of the corresponding period from last year. Around 126 foreign projects were granted investment licences with a total registered capital of $3.31 billion, down 33.9 per cent on-year. Meanwhile, 115 existing projects adjusted their investment capital with a total additional sum of $1.61 billion, 2.5 times higher than the period last year.

Indeed, Vietnam has attracted some mega-projects in the first two months of 2021. The joint venture between Vietnam Trading Engineering Construction JSC (Vietracimex) and Marubeni Corporation from Japan officially received the investment registration certificate for the 1,050MW O Mon II thermal power plant with the preliminary capital of VND30.56 trillion ($1.33 billion).

LG Display Haiphong Co., Ltd. has been awarded the certificate to expand investment by $750 million. The LG project is located in Trang Due IP, Haiphong city. After the capital expansion, the project will have a total investment capital of $3.25 billion.

In the period, Japan is Vietnam’s largest foreign investor with a total investment capital of $1.64 billion, accounting for 30 per cent of the total. Singapore came second with $1.07 billion or 19.6 per cent while South Korea was third with $1.05 billion or 19.3 per cent, followed by mainland China, Hong Kong, and the US.

Commenting on the increasing Japanese investment, Hirai Shinji, chief representative of the Japan Trade Promotion Organization in Ho Chi Minh City, cited a recent survey of 905 Japanese companies about their business operation in Vietnam. Among them, 46.8 per cent of respondents or 400 Japanese companies have plans to increase its investment in the country in the next 1-2 years. They will focus investment on general products, high-value goods, sales, logistics, and research.

“Although the expansion plan is 17.1 per cent lower than last year, the figure remains high in the midst of the COVID-19 pandemic. Japanese companies are looking for new investment opportunities in line with the growing revenue in the local market (65.9 per cent), rising earnings from export (48.7 per cent) and Vietnam’s high economic growth and potential (44.1 per cent),” he said.

In addition, Japanese companies are also considering re-establishing some supply chains affected by the COVID-19 outbreak such as changing purchasing units or relocating manufacturing sites. Vietnam has begun to attract the attention of Japanese raw material suppliers and buyers.

“After changing purchasing units, around 18.8 per cent of surveyed respondents will choose Vietnamese suppliers, which is the highest rate in 20 countries in Asia. Meanwhile, approximately 18.1 per cent of Japanese firms will relocate manufacturing to Vietnam, which only trails behind Thailand with 20 per cent,” he added.

Similarly, European business leaders ended 2020 more optimistic about Vietnam’s trade and investment environment than at any point since the COVID-19 outbreak, according to the Business Climate Index (BCI) from the European Chamber of Commerce.

The BCI climbed 6 points in the fourth quarter of 2020 to reach 63.6 – ending 2020 on a high. In total, the index rose 37 points over the course of last year, after falling to a historic low in the first quarter with the initial outbreak of COVID-19. Since then, the BCI has maintained positive growth as Vietnam’s successful handling of the pandemic and implementation of the EU-Vietnam Free Trade Agreement (EVFTA) combined to improve confidence and boost business.

When asked about Vietnam’s economic prospects in the next quarter, 57 per cent of EuroCham members predicted “stabilisation and improvement” in the first three months of 2021. Compared to the 39 per cent in the third quarter of 2020, this is a rise in confidence of 18 percentage points.

Commenting on the BCI, EuroCham chairman Nicolas Audier said that, “Our latest BCI paints a positive picture of Vietnam’s business environment as we look ahead to 2021. The growth in confidence we have seen over the last 12 months is a testament to the government’s swift and effective handling of COVID-19, and creates a strong foundation for the next five years of Vietnam’s socio-economic growth.”

“Meanwhile, our members report a positive impact of the EVFTA since it entered into force six months ago. European business leaders are looking forward to the increased trade and investment that the agreement will bring, while also highlighting some of the issues which need to be addressed to ensure its smooth and successful implementation.”

Michael Kokalari, chief economist at VinaCapital stressed that the increase in investors’ confidence stems partly from the fact that the government has now repeatedly demonstrated its ability to handle COVID-19 without overly impacting the economy. This has also made consumers feel confident, so we expect the growth of Vietnam’s household consumption to rebound to around 8-9 per cent this year.

“Regarding the Vietnamese economy in 2021, we made a forecast at the end of last year that Vietnam’s GDP would grow by 6.5 per cent in 2021, and our forecast assumed that there would probably be some sporadic COVID-19 outbreaks this year – like the current one – but that such sporadic outbreaks would not overly impact the country’s economy this year,” he added.