Fruit exports to China fall, but are offset by more exports to Thailand

A report from the Agricultural Product Processing and Market Development Department under the Ministry of Agriculture and Rural Development (MARD) showed that Vietnam exported $2.26 billion worth of vegetables and fruits in the first eight months of the year, a decrease of 11.3 percent compared with the same period last year. 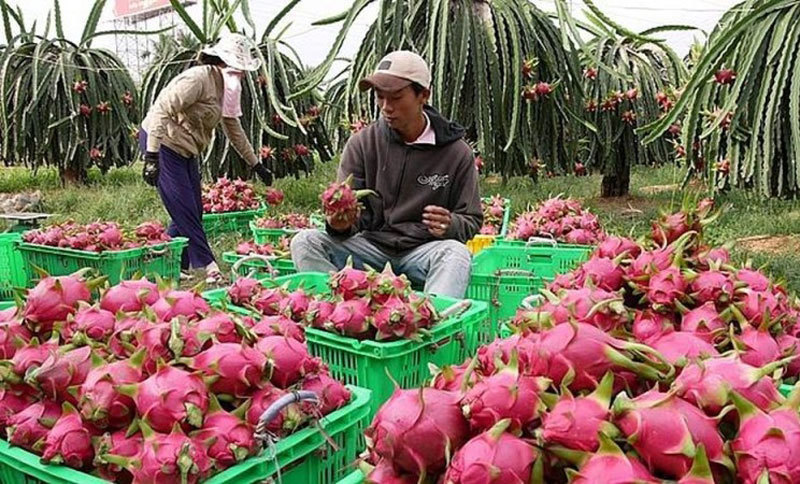 The dragon fruit price in Binh Thuan, Dong Nai and Dak Lak provinces decreased sharply in August to VND3,000-3,500 per kilogram, while it was VND6,000-7,000 per kilogram in late July.

Merchants said dragon fruit prices have dropped again because the fruit ripened at the time coinciding with the Covid-19 resurgence in many countries. As demand from importers is weak, merchants have stopped collecting dragon fruit from farmers.

The same occurred with longan in Hung Yen province. After the second Covid-19 outbreak, sales have been going very slowly. Farmers sell the highest-quality longan at just VND13,000-14,000 per kilogram. Sometimes the price has plunged to VND7,000-8,000, while it was at least VND30,000 per kilogram in previous years.

In the southern province of Ben Tre, saltwater has affected the quality of coconut. Merchants pay only VND6,000 for a dozen coconuts.

Regarding market development, MARD said there are positive signs about exports after great efforts by the ministry to negotiate with the US Department of Agriculture. APHIS has appointed officers in charge of supervising the treatment of fresh fruits to be exported to the US after a period of interruption because of Covid-19.

Besides China, the biggest market for Vietnam, other choosy markets also buy Vietnamese fruit. Red flesh dragon fruit is exported to Japan and Russia, while frozen durian is exported to Australia.

A report found that China was the biggest buyer of Vietnam’s farm produce in the first seven months, which consumed 58.2 percent of exports. However, exports to the 1.4 billion consumer market decreased by 28.9 percent to $1.15 billion.

By contrast, exports to South Korea, the US, Japan and Taiwan increased significantly in the first seven months of the year. Particularly, exports to Thailand soared by 215 percent.

Regarding vegetable and fruit imports, Vietnam imported $810 million worth of these products in the first eight months, a decrease of 36.1 percent over the same period last year. The US, China and Australia were the biggest suppliers.