Habeco forecasts profit to drop a third to 10-year low 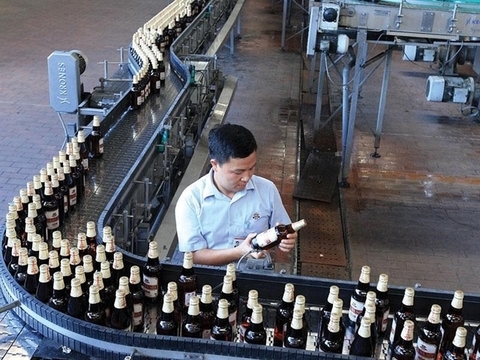 A production line at the Ha Noi Beer-Alcohol-Beverage JSC (Habeco). The company has forecast its post-tax profit in 2019 will drop to a 10-year low due to stronger market competition and lower sales volume. — Photo infonet.vn

The announcement will be reported at the firm’s annual shareholder.

Other topics that will be brought up at the meeting include the projection of total production, total revenue and dividend payouts.

Total revenue for 2019 is predicted to reach VND8.27 trillion and pre-tax profit is expected to touch VND384.5 billion.

The company will also ask shareholders to pass a 10 per cent dividend payout for 2019.

According to the company’s board of directors, the beer industry has gradually approached its break-even point with annual growth rate of 5 per cent.

Habeco’s sales volume in the north and central regions in 2018 fell 3 per cent year-on-year. The company has also encountered strong competition from other firms such as the Saigon Beer-Alcohol-Beverage JSC (Sabeco) and Heineken Vietnam.

In addition, increases to the special consumption tax and production costs had also hit home.

In 2019, the board of directors will keep restructuring the company and developing local retailers in the central and southern regions.

The company will strive to maintain its market share in the traditional markets in the northern and northern coastal regions.