The HCMC Real Estate Association has called on the HCMC authorities to release the list of 124 property projects that were previously suspended for investigations and inspections and have now resumed construction. 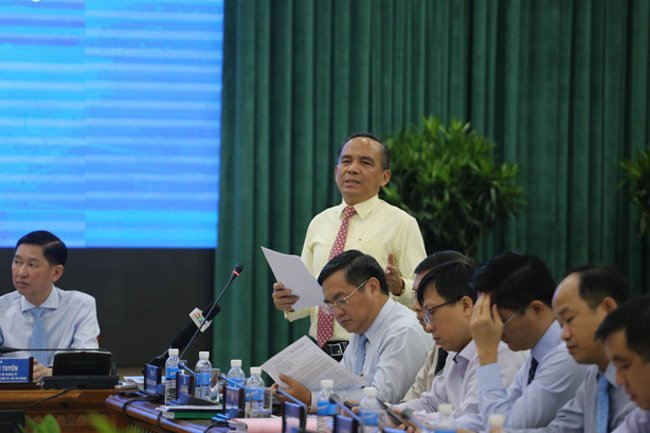 Le Hoang Chau, chairman of the HCMC Real Estate Association (HoREA), points out his concerns over stalled projects in the city – PHOTO: NLD

Held by the city government, the conference was aimed at canvassing opinions from local property firms and finding ways to resolve their complaints. Over 100 business representatives took part in the event chaired by the municipal Party chief, Nguyen Thien Nhan.

City officials and those in the central Government inspected more than 150 local property projects, approving 124 for resumption, according to HoREA Chairman Le Hoang Chau.

He noted this was good news for project investors and their clients and was also a positive sign for the local real estate sector. However, enterprises and residents have yet to access the project list.

He stressed its release would enable the investors in these projects to work with the relevant departments and agencies to complete investment and construction procedures, resume work and give homebuyers peace of mind.

The HoREA chairman also urged the HCMC People’s Committee and the Government Inspectorate to review the remaining projects as soon as possible. They should ensure no losses of public assets and the legitimate rights and interests of the concerned firms and homebuyers.

He claimed that the longer it takes to investigate, the more disadvantages property developers suffer due to their increased costs in terms of both investment capital and interest payments on bank loans, as well as their risk of missing out on business opportunities.

According to HoREA, the number of property projects is dropping, resulting in a sharp decline in the number of housing units available on the local market.

The association said statistics showed that the city’s collection of land use fees fell by 22.5% in 2018 and by a staggering 76% in the first two months of 2019 from a year earlier.

Tax debts in January and February this year amounted to over VND10.1 trillion (US$435 million), some VND1.37 trillion of which was related to land-related items, accounting for 14% of the total. Up to 76 local property firms had land use tax arrears of some VND794 billion in total.

In the first quarter of this year, the HCMC Department of Construction issued a total of 8,472 construction permits, including private housing, a year-on-year fall of 16%.

Worse still, construction enterprises saw a reduction of between 30% and 50% in the number of construction contracts because property investors lacked new projects.

The HoREA chairman also called for the early settlement of some 300 public land spaces, subject to the withdrawal of their decisions or certificates on land use.

At the conference, many property developers expressed concern over procedural overlaps and legal bottlenecks, especially for administrative procedures, which have made life difficult for them.

Most of the project sites use non-State agricultural land for which the company spent its own money compensating affected residents and covering site clearance costs, she noted.

She pointed to one project spanning 3,000 square meters in the outlying district of Nha Be as an example.

In October 2017, the city government approved investment in-principle for the project. The company then completed application procedures, and its 1/500-scale zoning plan was approved in November 2018.

When the application was submitted to the municipal people’s committee, an official rejected it since the local construction department had marked it as “basically complete” rather than “complete.”

Other representatives also expected the city government to speed up the handling of regulatory procedures so that their projects can be undertaken quickly. SGT