The HCMC People's Committee has assigned the Urban Railway Management Board to plan the implementation of the Ben Thanh underground shopping mall project.

The project was approved by Deputy Prime Minister Pham Binh Minh in late 2016. HCMC has been told to consider using ODA capital to implement the project. The municipal authorities will have to work with the Ministries Planning and Investment, Construction and Finance on a suitable plan. 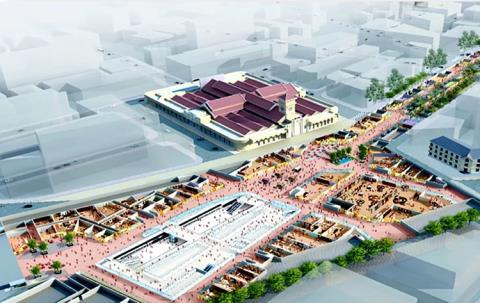 According to the Japan International Cooperation Agency (JICA), the project would need VND8.4 trillion, of which the local authorities would invest VND4.98 trillion with ODA loans, while investors would contribute VND3.41 trillion under the PPP mode.

“In other countries, such works do not use the state’s money. The state only creates favorable conditions for investors to develop such projects,” Cuong said.

In principle, the state encourages private investments in projects. It doesn’t develop works for commercial exploitation, but focuses on infrastructure.

Cuong went on to say that it is necessary to think about when to implement the project.

Only when the subway system is completed, the transport conditions become stable, and when the capital for technical infrastructure system is ready should the commercial center project be implemented.

Meanwhile, there are still too many questions to be solved. How will such a big commercial center affect the transport system in the area?

An analyst has raised a question about why the municipal authorities are thinking of using ODA capital for the project. He warned that when using ODA capital, the state will have to come forward and pay debts. The project will face certain risks as it has to satisfy the requirements set by the lenders.

“In general, borrowers have to choose contractors from the countries which provide ODA, and use the equipment and machines of the countries,” he said, adding that the project would require a huge amount of money.

He said that in the immediate time, the city should use loans to settle the issues of the transport network. HCMC is suffering from traffic jam, while the more the central area develops, the more severe the jam will be.

“HCM City has many other things that need to be done. If it doesn’t gather strength to settle key problems, the situation will be very serious,” he said, citing traffic congestion at Tan Son Nhat Airport as an example.

The Ministry of Transport has sought the Government’s approval to seek investors for the HCM City-Moc Bai Expressway.