The low-cost market segment is a strategy for luxury brands to offset revenue decreases and diversify sources of revenue.

Ong Bau, a coffee chain established by a group of businessmen, had opened 100 shops in 15 cities and provinces as of early July. 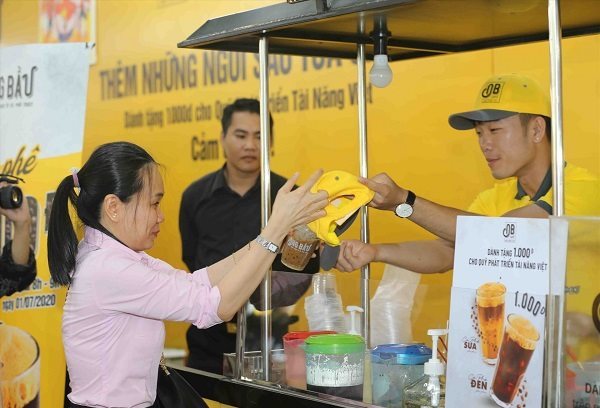 The three founders of the chain said they have 600 applications for franchising and hope to have 10,000 shops by 2022.

The outstanding feature of the chain is the strategy in competing with rivals in pricing. One cup of iced milk coffee costs VND18,000, lower than the prices of any other chains.

Meanwhile, the coffee chains in higher-end market segment such as Trung Nguyen, Starbucks, Coffee Bean & Tea Leaf and Paris Baguette, the price is around VND75,000. At luxury Runam, a cup of coffee is sold at VND115,000 or higher.

The appearance of Ong Bau, with shops on streets, is a ‘wake-up call’ for high-end coffee chains.

The chains, in an effort to seek new sources of revenue, have tried to approach middle and low income earners. The number of such chains increased after social distancing in April and May.

According to Euromonitor, tea and coffee chains in Vietnam have revenue of $1 billion a year, but mid- and high-end chains only make up 15-20 percent.

The remaining is reserved for many different service providers, from street vendors to coffee booths to cafés on pavements.

On the streets of Nguyen Oanh in Go Vap district and Truong Son in Tan Binh and crowded streets in the central area of HCM City, street vendors appear at 7-9 am every day. Tens of cups of take-away coffee are sold during the two hours at VND29,000 per cup.

“The market is very large, easy to please and doesn’t require high investment capital,” he said, explaining why it deserves investment.

“As income has decreased, consumers have tightened their purse strings. That is what F&B chains have learned,” he said, adding that it would be unwise to ignore the low-cost market segment.