A number of famous international fast fashion brands have arrived in the promising Vietnamese market.

After opening its first store in HCM City in December 2019, Japanese fast-fashion brand Uniqlo is already planning its second store in the country, which will be located in the capital city of Hanoi. 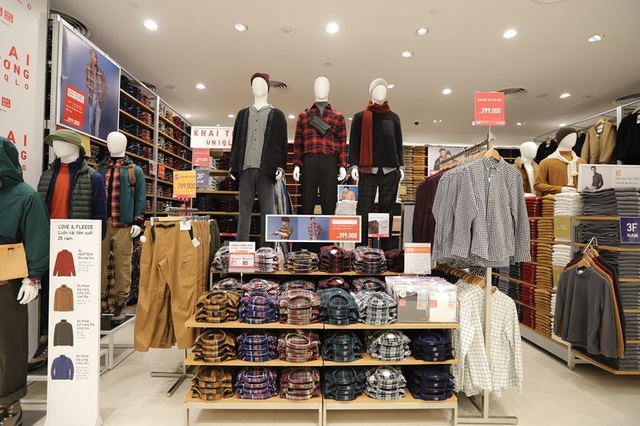 It is said that Uniqlo's Hanoi 2,500 square-metre store will be located on two floors of a big shopping centre on Pham Ngoc Thach Street.

In 2019, Vietnam saw the arriving of two famous fast fashion brands including Cotton On and Uniqlo. Over the past two years, many international brands have arrived in the country including the much-awaited H&M and Zara.

According to the Vietnam Retailers Association, there are now more than 200 foreign fashion brands in Vietnam, making up over 60% of the local market which is said to have an average growth rate of between 15-20%. A recent survey by Nielsen showed that the number of Vietnamese people who love well-known brands stands third in the world, just after China (74%) and India (59%).

A forecast by BMI said that Vietnamese people's spending on fashion is growing at an average rate of 10% per year during 2017-2021 against 7% of previous years.

"This is a lucrative market for international fashion brands," the forecast said.

Statistics from the Vietnam National Textile and Garment Group showed that the local market has seen a high growth rate of 20% per year.

"The value of the local garment and textile market is about USD4.5 billion/year which is equivalent to 40 million sets of clothes," the statistics said. "Vietnamese people are spending some VND100 trillion (USD4.4 million) on clothing,"

The great attraction of the Vietnamese fashion market to international companies can be seen from Zara's business results. A report by the Vietnam Industry Research And Consultancy showed that Zara made a revenues of VND321 billion (USD13,956) after just four months operating in Vietnam in 2016.

In 2017, Zara Vietnam's revenues climbed up to over VND1.1 trillion (USD48 million), and to nearly VND950 billion in the first half of 2018, according to Mitra Adiperkasa.

H&M also said they saw a big opportunities in the Vietnamese market with a young population and a fast-growing economy.

However, many foreign brands said that they have faced some difficulties when expanding to Vietnam, especially in space rentals which are skyrocketing over the past two years.