Latest reports from investment funds in February show they have suffered from the decline of the market amid the global spread of coronavirus, or COVID-19.

The benchmark VN-Index on the Ho Chi Minh Stock Exchange has lost a total of 23.1 per cent between January 30 and March 14 when the stock market re-opened after the Tet (Lunar New Year) holiday.

The tumble of the Vietnamese stock benchmark concurs with the strong selling of foreign investors, which has reached a total net value of nearly VND4.73 trillion (US$203.6 million) during the period.

In February, the VN-Index was down a total of 5.81 per cent and foreign investors net-sold a total of VND3.15 trillion.

Worries about COVID-19 and its impact on the global economy and people’s health, and late responses of governments triggered a large-scale sell-off around global markets and pushed indices down.

The Hong Kong-based AFC Vietnam Fund recorded a loss of 3.9 per cent in February performance. The Swedish fund Tundra Vietnam Fund saw its portfolio value drop 3.1 per cent last month, raising the total loss to 7.8 per cent in the first two months of the year.

The poor performance was attributed to the strong decline of investees that account for a large proportion of the fund’s portfolio such as the HCM City Infrastructure Investment JSC (CII), the Vietnam Engine and Agricultural Machinery Corporation (VEA) and Mobile World Investment Corp (MWG).

Travelling and immigration restrictions have brought some damage to local industries such as aviation, tourism, energy and exporting agriculture, according to PYN Elite Fund.

In the January-February period, Viet Nam’s agriculture exports fell 4.3 per cent to $2.5 billion. The local Manufacturing Purchasing Managers’ Index (PMI) dropped to 49 in February from 50.6 in January as orders declined and production costs went up due to the disruption of the global supply chain.

Despite being surrounded by difficulties, foreign funds are still optimistic about the future prospects of the local assets.

AFC Vietnam Fund said in a report the pandemic will cause damage to the global stock markets in one or two quarters and the worst-hit sectors are likely tourism and hospitality.

But losses will be covered quickly in the second six-month period of the year as Vietnamese shares are now cheaper than they were at the beginning of the year.

The Government will have policies to support the hard-hit sectors such as tourism and manufacturing, which contributed 12-20 per cent of the total GDP in 2019, and restrain the damage caused by the pandemic.

The moving of factories from China will help raise Viet Nam’s GDP growth by additional 2 per cent and the ratification of the Europe-Viet Nam Free Trade Agreement (EVFTA) will boost Viet Nam’s exports to the European markets by 42.7 per cent in the next five years. – VNS

Even in a rebounding scenario, the VN-Index on the Hochiminh Stock Exchange is expected to experience wild volatility and revisit a support range of 710-740 points next week, according to Bao Viet Securities.

The Vietnamese stock market had a tough time throughout February with most stocks weakening amid concern about the global spread of the coronavirus disease(COVID-19). 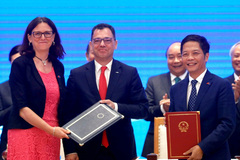