Trung from Soc Son district in Hanoi, one of 63 excellent farmers of the nation honored in 2020, tells an interesting story about how he became a billionaire. 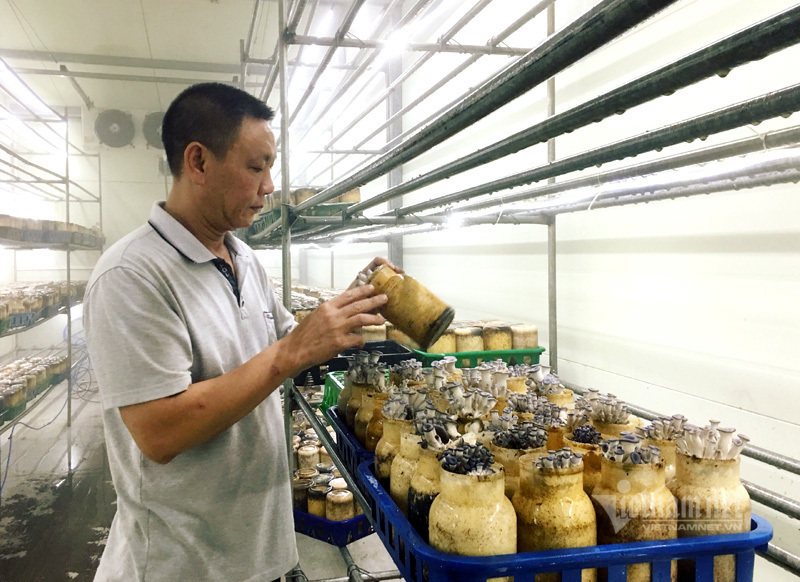 When Trung was a second-year student at the Hanoi Transport University, he met an acquaintance of the family who talked about high-tech agricultural production. The story, plus his passion for mushroom cultivation that he had cherished for a long time, prompted him to give up studying at the university and become a farmer.

To implement his ‘mushroom dream’, Trung left for South Korea to study microbiology and edible and medicinal mushrooms for four years.

He realized that mushrooms are a clean food with high nutritional content, so the demand is increasingly high. So he decided that he would build a plant to produce clean mushrooms and provide products to Vietnamese consumers.

In 2014, a plant that produces mushrooms in accordance with South Korean technology, covering an area of 2,400 square meters, was built in Vietnam.

However, the first step was the hardest. He was disappointed as the production failed. At least 95 percent of mushrooms were affected by mold because of under-standard input materials: (sawdust, rice bran, corn cobs) were at a high humidity level and were not preserved well enough.

The situation lasted two years, which caused him to lose VND2-3 billion a year and fall into despair.

However, he never thought of giving up, and put all of his enthusiasm and his money into the plant. He continued to borrow money from banks, relatives and friends to overcome the difficulties.

Trung not only had to work hard at the plant, but also had to persuade his wife and relatives to believe that he would succeed with the knowledge he received during the training in South Korea and his lessons from failures.

He had to visit every supermarket, restaurant and residential quarter to introduce his products. However, he sold only 20-30 kilograms a day and lost VND6-7 billion within two years.

After a lot of effort, farming improved with the high success rate of 95 percent. He said that mushroom production on an industrial scale doesn’t depend on weather conditions.

And now, his mushroom farm covers an area of 5,000 square meters which produces 330 tons a year and brings turnover of VND30-36 billion year. Every day, he can sell 500-600 kilograms of mushrooms of different kinds.

Domestic demand the driving force for agriculture to develop