Ministries need to analyse the impact of coronavirus on both international and domestic markets, then deliver short-term and long-term solutions, Minister of Industry and Trade Tran Tuan Anh said on January 31.

The analysis and solutions must stick with the development of the Vietnamese economy so that the economy increased its competitiveness, quality and productivity, he said.

“It is time we hastened the restructuring of all sectors,” the minister said, adding it was necessary to look for opportunities in other markets, especially those with potential for further penetration.

According to officials at the Ministry of Industry and Trade, the restriction that nations are deploying to prevent a global-scale outbreak of the disease would slow the growth of the retail sector down.

In addition, the number of foreign tourists, especially the Chinese, will fall down in the future while bilateral trade between Vietnam and China will be jammed.

The border gates between Vietnam and China in Lang Son province are being shut down as the Chinese government has taken drastic measures to control and prevent the coronavirus from spreading.

The shutdown is jamming Vietnamese container trucks, which are filled with fruits, vegetables and other short-term agriculture products.

According to the Agency of Foreign Trade, the outbreak of the deadly coronavirus has lowered retail sales in China. In addition, the Chinese government has carried out measures to strictly control the infection, leading to the extensive shutdown of the border gate.

Vietnam and China had planned to open the border gate in Lang Son province’s Cao Loc district on January 31 for the continuance of bilateral trade after the Tet (Lunar New Year) holiday. However, the spread of the disease forced Chinese officials to extend the shutdown until February 9.

The consumption of agricultural products had fallen in China while trade activities between the two economies was also badly affected, the agency said in a request sent to the Vietnam Logistic Business Association (VLA) on January 30.

The agency asked the VLA and member companies to pay attention to new developments and assist exporters to store agricultural products while waiting for the border gate to be re-opened. Local firms are also advised to look for alternate consumers in both domestic and overseas markets.

The Ministry of Industry and Trade also asked local companies to keep close watch on trade activities between Vietnam and China amid new developments of the current event to avoid negative impacts on their business.

The ministry will also work the Ministry of Agriculture and Rural Development to encourage local firms to produce dried products and fruit juice to raise the product value and extend the product expirations. VNA 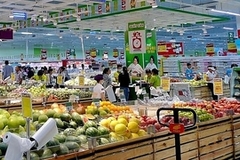