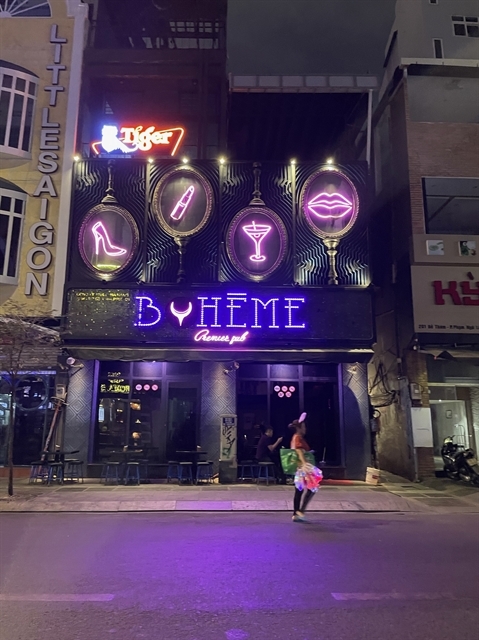 Bui Vien and its connecting streets in District 1 are known as a hotspot for entertaining at night and during the weekend. Due to the pandemic, they have faced multiple challenges keeping their businesses alive.

Many bars bands such as Hair of the Dog, Sahara, Go2 and S.H are now closed.

“It has been very difficult these days. I thought the pandemic would be over soon so I could resume casual business. But we have not been that lucky,” said Bach Nguyen, a lounge owner on Bui Vien Street.

Bach added that even though he had offered many promotions, both online and offline such as "buy one get one free" or even "buy one get two free", business remained poor.

Some businesses have switched to selling snacks or dishes related to snails to attract young customers, while others are serving during lunch time, with local dishes offered to people working nearby.

At 9pm during weekdays, the street is lit with many neon signs, but it lacks customers. Many business owners and staff can be seen on the street trying to lure potential guests inside.

“We used to have almost 20 staff who were running back and forth in the restaurant serving customers. The number of staff has reduced to eight and our sales revenue has fallen significantly,” Thien Trần, a business owner on Bui Vien, said.
The restaurant had no choice but to reduce its staff, even though Thien acknowledged that it would create more stress for them. During the lockdown, his staff helped to renovate the restaurant, so he felt guilty laying off some of them.

But his case was not as troublesome as his friend’s, who has had to pay billions of đồng in rent for five branches he manages in the same area.

Business venues on Bui Vien Street are usually rented at US$4,000 to 5,000 per house. Although Thien’s friend was offered a 30 per cent discount on the rental fee, it has been difficult to keep his business going.

The situation is not any brighter for accommodation businesses in the area. Before the pandemic hit, Bui Vien Street used to be filled with many foreigners looking for affordable places to stay.

According to Sai Gon Giải Phong (Liberated Sai Gon) newspaper, hotels and guesthouses have been more severely affected than food and beverage businesses, with numerous hotels and hostels temporarily closed.

Hoa Pham, a hotel owner on a small alley on Bui Vien Street, said that her business had been on hold for months as 75 per cent of her guests used to be international visitors. Revenues earned from domestic guests visiting HCM City had not been enough to secure her family income and they had had to live off their savings at the moment.

Some business owners said that authorities should lift some barriers on opening times and the volume of noise on certain streets to develop the night economy.

“The night economy should not ask customers to enjoy their night in silence,” a business owner said.

Bui Vien pedestrian street has 90 venues open for food and beverage-related activities, and 40 of them have closed down.

According to District 1 authorities, 20 new businesses on Bui Vien were registered in 2020, but the year also witnessed eight firms calling a halt to their operations.

Businesses lose customers, run out of money, lay off workers