On July 8, the Project Management Unit No 6 under the Ministry of Transport (MOT) organized the preselection of investors for two components of the North-south Expressway project, the Nghi Son – Dien Chau and Dien Chau – Bai Vot. The projects will be implemented under the PPP mode. 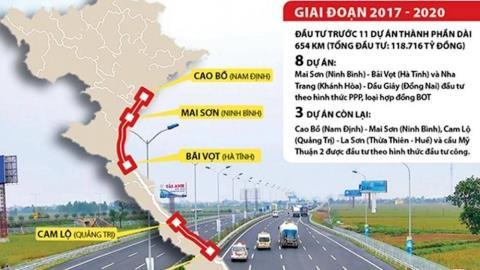 Dat Viet reported that Chinese and South Korean investors are dominant in the two projects. Of six investors registering to execute the Nghi Son – Dien Chau component project, four are from South Korea and China.

As for Dien Chau – Bai Vot, seven out of 10 investors are from South Korea and China.

Nguyen Mai, chair of the Vietnam Association of Foreign Invested Enterprises (VAFIEs), said Vietnam does not discriminate against investors. However, he noted that most of the projects executed by South Korean and Chinese contractors ‘had problems’.

“It’s the right time for Vietnam to build an expressway on its own,” Mai said.

The expert said there are many domestic investors who are capable, experienced and willing to implement the project.

An analyst said that Vietnamese contractors, implementing large-scale projects, such as Van Don – Mong Cai and Bac Giang – Lang Son, for the first time, could fulfill their works successfully.

He said that one kilometer of highway implemented by Vietnamese contractors has the cost of $4-5 million. Meanwhile, witb foreign contractors it is more costly, up to $20million per kilometers.

Mai stressed that this is not an ODA-funded project, and there is no need to organize international bids and invite foreign contractors. Vietnam also doesn’t have to use materials, machines and workers from lending countries.

He thinks there is no need to hurry to implement the project and that it would be better to delay the time for opening bids until the Public Investment Law is amended, paving the way for domestic enterprises to execute the project.

“I cannot see any reason to worry that Vietnamese enterprises cannot implement the project,” he said.

Fifty-one investors have been selected in the preliminary bidding for seven public-private partnership (PPP) projects for the North-South Expressway.