Deo Ca, Vinaconex, Tasco, Sungroup and Vingroup all hope to participate in implementation of the North-South Expressway project.

By cancelling the open international bidding for eight projects of the North-South expressway, the Ministry of Transport (MOT) is offering the big jobs to Vietnamese contractors. 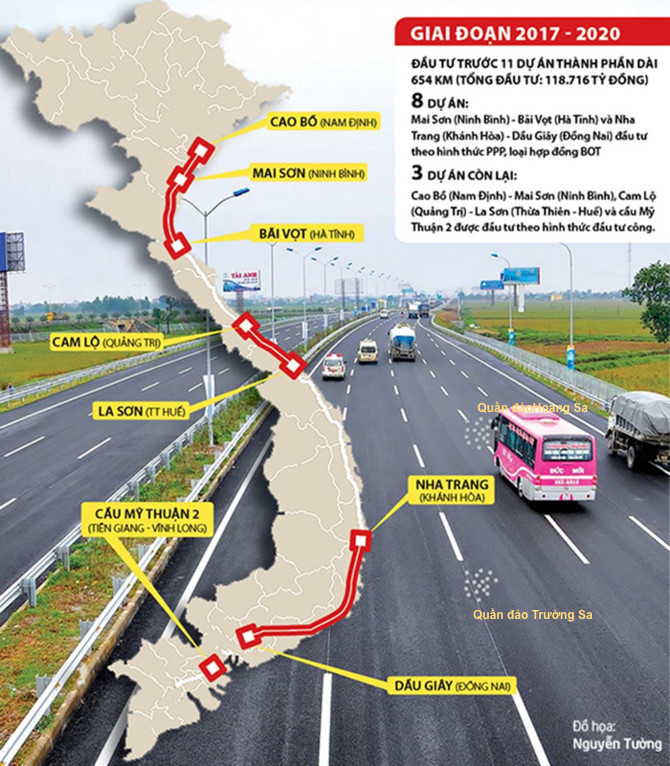 Tran Van The, deputy chair of Deo Ca Group, applauded the decision, saying that the move gives more opportunities to homegrown investors to undertake important projects and improve their capability.

According to Nguyen Danh Huy, director of the PPP (private public partnership) Department under MOT, many Vietnamese investors are ready to attend the bids for implementing the eight sub-projects under the PPP mode.

Deo Ca is one of the best known names. It is called the ‘rescue King’ as it undertook a series of transport infrastructure projects which met difficulties in the past.

The VND12 trillion 64 kilometer Bac Giang – Lang Son highway is an example. After taking over the project, Deo Ca arranged capital and implemented the project smoothly. The highway is expected to be handed over and put into operation by earl 2020.

Deo Ca was also the investor which took over the Phuoc Tuong – Phu Gia project which shares a fee collection station with Hai Van 2 Tunnel. It is estimated that 98.5 percent of work of consolidating the Hai Van 2 Tunnel has been implemented and the tunnel is scheduled to become operational in December 2020.

As for Trung Luong – My Thuan project, previously, the State gave support by allowing fee collection at the HCM City – Trung Luong Station. However, since the Public Asset Management Law took effect, the solution is no longer appropriate and banks have refused to make disbursements. Deo CA then took over the project management.

A recent report shows that the execution output on the construction site has increased by 30 percent.

A representative of Deo Ca Group said the group is fully capable in capital anf experience, especially project management capability, to become the investor of the sub-projects of the North-South Expressway.

As for Tasco, some sources said the enterprise established in 1971 is having difficulties as HUT share price has dropped to VND2,400 per share only. However, Tasco is still the ‘BOT tycoon’ with a series of BOT projects implemented, including Tan De Bridge, Highway 10 in Hai Phong City and My Loc.

Phuong Thanh Transcosin’s CEO Pham Van Khoi has also expressed interest in the North-South Expressway. The company is teaming up with another investor to attend the bidding for the project, but it needs to find financiers.

Meanwhile, Vingroup and Sungroup are keeping open the possibility of participating in the projects.

Transport Ministry might switch to open bidding for North-South Expressway

The Ministry of Transport has issued a statement regarding the selection of investors for a projectto build a number of routes in the eastern section of the North-South Expressway.

The transport ministry announced on Monday they would cancel open international bidding for eight projects of the North-South expressway, in favour of homegrown investors.