Opportunities for Vietnam’s trade when the U.S removes stay-at-home orders

The United States is Vietnam’s key export market. When U.S. consumers had to stay at home due to Covid-19 and slash spending, Vietnam’s exporters struggled.

Yet as soon as those stay-at-home orders are removed, Vietnamese products have started to depart for the U.S. 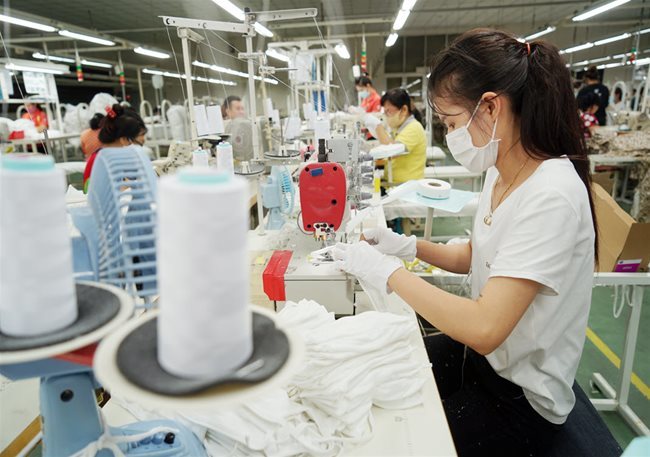 When Covid-19 reached the U.S. with hundreds of thousands of infected cases and tens of thousands of deaths, U.S. President Donald Trump invoked the Defense Production Act to prevent its spread. In mid-April 2020, most states imposed stay-at-home orders.

Retail shops selling non-essential products had to halt operations. According to GlobalData Retail, about 40% of retail outlets, equivalent to 200,000 shops, had to shut down. Most of them sold apparel items.

Leading apparel retail firms in the U.S. had to put almost one million staff on furlough, including Gap Inc. (80,000 staff at retail outlets under Banana Republic, Old Navy and Gap); Macy (most of its 130,000 staff); JC Penney (90,000) and Kohl’s (85,000). The U.S. Department of Labor says that during the period of over two weeks from the end of March to the start of April, about 10 million people applied for unemployment benefits as they went on no-pay leave.

The gloomy economic outlook has dragged down demand in the U.S. Consumers are adversely affected by the pandemic, which restricts movement, engenders worries about health and makes them less likely to shop. Their income plunges as various sectors tumble (retail, aviation, tourism, oil, manufacturing, commerce, service and stock). They also struggle to settle bills (housing, cars, insurance and so on). Concerns abound about a possible economic downturn that caused job and income losses. Consequently, purchasing power plummets. Spending in April dropped by 12.9%. Consumers have to tighten their expenditure, so export to the U.S. is unlikely to recover quickly. They will be unlikely to buy clothes, footwear, woodwork and electronic products, Vietnam’s main exports to this market.

Exporters to the U.S. in trouble

The U.S. economy depends on domestic consumption, which accounts for over two-thirds of its GDP. According to Bloomberg Intelligence, retail revenue will fall by 30% and threaten the survival of many local retailers. Consequently, many U.S. retailers have cancelled orders placed with firms in Asia, including Vietnam.

Plunging orders have directly hampered Vietnam’s economy in particular and those of Asian countries in general as they rely on export. Exporters, factories, maritime transport, supply chains, as well as the millions of workers in the related sectors are all confronted with challenges.

In view of the economic impacts of protracted social distancing, most states removed stay-at-home orders in late May despite objection from the media and society. According to the U.S. Department of Commerce, at the end of August, personal income rose after sliding for two months. Spending increased by 6.2% in June and 1.9% in July. With the reopening of shops, retail sales in June rose by 5.6% year-on-year and 6.8% month-on-month. Retail sales in July climbed by 5.8% year-on-year but merely 0.8% month-on-month (Source: US Census Bureau’s Monthly Retail Trade Report).

It is noteworthy that in September, Home Depot announced its plan not to embark on Black Friday sales. Instead, there will be two months of sales from early November to December. To protect consumers during the pandemic and encourage spending during the festival season, online shopping, especially via smartphone applications, will be encouraged with enticing prices offered. This approach seems to resonate with many other retailers.

Increasing export to the U.S.

By virtue of the timely easing of social distancing and the reopening of the U.S. economy, export to this market improved in the peak season of June-September although the pandemic remains detrimental. Although the last quarter is not a peak season, longer periods of promotions and demand stimulus initiatives during the festival season have encouraged retailers to import more. This bodes well for export to the U.S. in the remaining months of 2020.

Second, apart from direct services, there are opportunities for feeder services linked with transshipment ports in Singapore and Tanjung Pelepas (Malaysia) to the south and Yantian (China), Hong Kong, Kaohsiung (Taiwan) and Pusan (Korea) to the north. Domestic shipping firms can independently tap into these routes or join forces with their international counterparts.

Local and transshipment routes can also be harnessed simultaneously, enabling flexible collaboration between domestic and foreign shipping firms. This will be a cause of celebration for Vietnam’s maritime transport.