The new players to the aviation market are also setting eyes on the hugely profitable on-ground airport services. 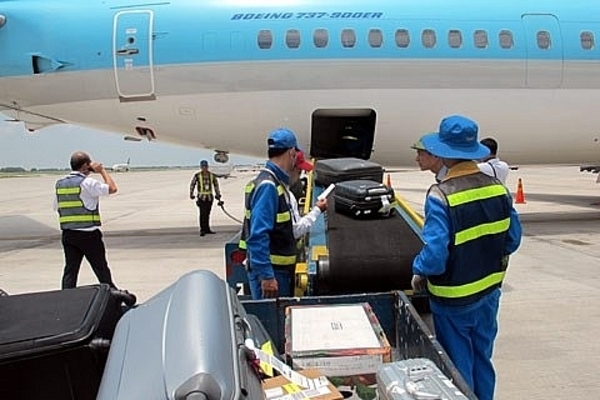 Additionally, some airline giants also want to exercise on-ground airport services to improve quality and competitiveness against other players.

At Noi Bai, the air carrier has 18 aircraft, flying on 15 domestic and 16 international air routes with 150 flights a day on average. The number of aircraft and flights will be higher in the time to come. Vietjet Air's on-ground services will increase the airline’s service capabilities and at the same time improve passenger service quality as well as the prestige of the aviation sector.

A senior executive of Vietjet Air complained that the current on-ground services provided by professional companies are bad and the airline has received a lot of complaints about service quality.

According to aviation experts, with the current high speed of growth, in addition to investing and improving infrastructure and human resources, on-ground airport services also need to be improved.

These services include flight planning, apron engineering, passenger service, luggage, aircraft cleaning, support services, as well as maintenance and repair, which are exercised by Hanoi Ground Service JSC (HGS) and Saigon Ground Services (SAGS) in which Airports Corporation of Vietnam (ACV) holds 20 and 48 per cent, respectively.

The strong development of non-aviation services has also contributed to the company’s revenue growth. SAGS plans to obtain a revenue of VND1.43 trillion ($62.17 million) in 2019, an increase of 11 per cent, and after-tax profit of VND285 billion ($12.4 million), an increase of 8.4 per cent compared to 2018.

HGS reported a profit of VND72.4 billion ($3.15 million) in 2018, an increase of 6 per cent compared to 2017. The International Air Transport Association (IATA) predicted that Vietnam would become the fifth fastest-growing aviation market in the world by 2025.

In related news, Vietstar Airlines, after securing the air operator’s certificate (AOC), has become the sixth air carrier of Vietnam. Competition in the Vietnamese air transport market has been intensifying this year as more airlines are joining the market.

"The entry of the private sector and the presence of more players in the segment of on-ground airport services will improve the quality of these services," Tong said, which would improve the brand and ranking of Vietnamese aviation, in turn. VIR

The Ministry of Transport has asked the government to consider allocating capital for the upgrade of runways at Noi Bai and Tan Son Nhat international airports.