Electors from Hai Duong province have raised a question to MOT about the Pha Lai – Ha Long railway, complaining that the suspension of project implementation after 15 years of execution has caused problems to Hai Duong, where the railway goes through. It separates roads and internal canals, and cuts large field areas into small plots. 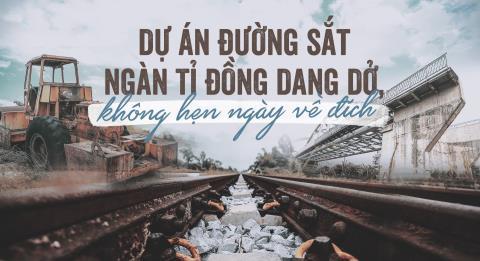 The project execution started in May 2005. With the total length of 131 kilometers, the project has total investment capital of VND7.663 trillion sourced from government bonds.

“The site clearance has been completed, but it is unclear if the project would continue or stop. This puts big difficulties for the programming of the local development,” said Le Quy Tien, director of the Hai Duong provincial Transport Department.

Dang Dinh Dao, former director of the Institute for Economic Research and Development, said he can see problems from the very beginning.

While all the other railways in Vietnam have the gauge of one meter, the Yen Vien – Pha Lai – Ha Long – Cai Lan project is designed to have the gauge of 1.435 meters and the speed of 120 kilometers per hour, in accordance with international standard.

The railway is the only one which has such a gauge, therefore, it doesn’t match other railways. This means that transport firms, when reaching Hanoi, will have to shift to use other trains running on 1-meter gauge.

“This will cost more time and higher cost if compared with road transport,” said Dao.

Tens of tons of materials, including rails, sleepers, bolts and screws imported from China, have piled up at the Dong Trieu Station in Quang Ninh for many years. However, there is no sign of resumption of the project implementation.

“The local authorities have made a reasonable proposal. Materials have been imported but have not been used, which is a big waste,” Dao said.

“MOT must be responsible for the tardiness in implementing the project and for the big money spent to buy the materials which are lying unused. It must not leave the project in a pending state for so many years which causes consequences and hinders the development of locality,” he said.

The expert went on to say that it is necessary to reconsider the feasibility and the economic benefits railway projects can bring.

The railway is described as a ‘very important project which connects key economic zones, serving as the driving force for the development of the northern economic zone.

Private investment to be sought for long-delayed railway project

The Ministry of Transport has proposed the prime minister call on private firms to get involved in the Yen Vien-Pha Lai-Halong-Cai Lan railway project in the northern region, which was started 15 years ago but has been suspended.