2020 is expected to be a tough year for real estate developers, but some real estate firms still have high hopes thanks to the large land holdings they own.

According to Rong Viet Securities, real estate firms with large land banks are ‘big players’ in the market. It predicts a prosperous year for the firms with land plots in central positions which have clear legal status. 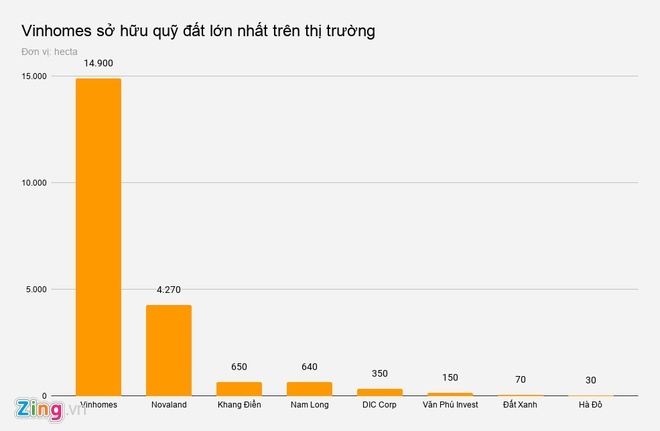 Vinhomes (VHM) is believed to be the real estate developer with the largest land bank of up to 14,900 hectares. Fifty percent of the land is located in Hanoi and HCM City, while the remaining land is in bustling areas such as Quang Ninh.

With huge projects such as Vinhomes Ocean Park, Vinhomes Smart City, Vinhomes Wonder Park and Vinhomes Grad Park in HCM City and Hanoi, Vinhomes is trying to develop large-scale cities covering hundreds of hectares in the suburban areas of Hanoi and HCM City.

The enterprise stated that with its land Bank, it will be able to have stable development in the next 10-20 years.

Khang Dien accumulated land through the acquisition of Binh Chanh Investment and Construction in late 2017. The land plots are mostly located in HCM City.

In the next two years, Verosa Park and Clarita projects will make significant contributions to the firm’s growth with the average expected profit rate of 30-40 percent.

Meanwhile, Nam Long has been expanding its coverage to large provinces, including Dong Nai in the south and Hai Phong in the north. Rong Viet Securities believes that the areas have great growth potential in the medium term thanks to the improvement of local infrastructure conditions. The provinces are considered the portal that connects the northern and the southern economic hubs.

Other real estate firms, namely DIC Corp, Van Phu Invest, Dat Xanh and Ha Do, have tens or hundreds of hectares each.

Predicting the market in 2020, Rong Viet said real estate developers are trying to accumulate more and more land to prepare for the future. However, it believes that only projects in the central areas, such as Hanoi and HCM City, will have high absorption rate, while the situation will be more difficult in other provinces and cities.

The coronavirus epidemic has caused a shock to global tourism, seriously affecting hotels and resorts.