The confrontation between RedDoorz and OYO in the hotel sector has been compared to the duel between Uber and Grab in the past. 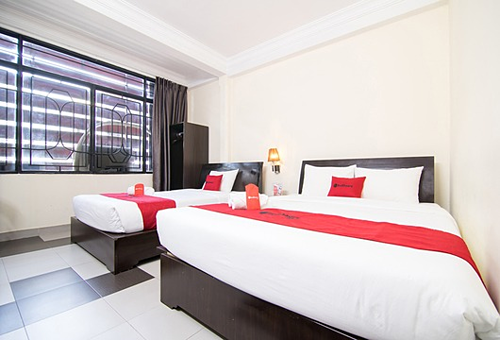 Within a radius of hundreds of meters, OYO, the rival of RedDooz, with a similar business model, has three hotels, including two on Ky Con street and one on Nguyen Thai Binh. The hotel room rates are VND350,000-500,000 per night.

Both OYO and RedDoorz use red for brand identification, from logo to decoration style in rooms. And both have been trying to expand their networks in Vietnam.

RedDoorz debuted in late March, about three months earlier than OYO. At the time of opening, the hotel chain operating under the franchise mode from Singapore had 40 hotels in HCMC. The figure increased to 70.

In late June OYO joined the Vietnamese market. At that moment, the largest Indian hotel chain had 90 franchised hotels in six provinces/cities, including Hanoi, HCMC, Da Nang, Phu Quoc, Vung Tau and Nha Trang, and stated it would pour $50 million into Vietnam.

Once an open playing field, the hotel market in this segment has heated up, mostly between the two foreign hoteliers, compared with the confrontation between Uber and Grab.

Both are foreign startups which take full advantage of technology to develop a long existing industry. The two startups provide technology systems which franchised hotels applied in management, and provide guests to partners thanks to booking systems. They also run media campaigns.

Both have set ambitious business plans in Vietnam. OYO plans to inject $50 million into the market and wants to have 20,000 hotel rooms by the end of the next year.

Meanwhile, RedDoorz plans to set up hotels in three more cities, including Vung Tau, Da Nang and Hanoi, to raise the total number of hotels to 200 this year.

Hotel room bookings through online travel agencies on the rise

The number of luxury hotel rooms in Vietnam booked through online travel agencies (OTAs) continued to rise last year, making up 23.4% of the total, compared with 21.4% a year earlier.

Five-star hotels in the country increased room rates by 4.1 per cent last year while four-star hotels dropped theirs by 2.3 per cent, according to the Vietnam Hotel Survey released on Thursday by Grant Thornton.