Nearly 100 percent of materials needed to make textile and garment products must be imported, limiting Vietnam’s to take full advantage of preferential tariffs in FTAs.

All the FTAs Vietnam signed stipulate that textiles and garments must meet the requirements on origin to be eligible for preferential tariffs. 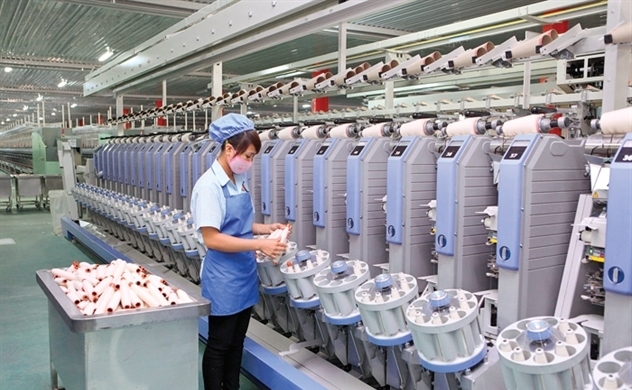 Under the FTAs Vietnam acceded to some years ago, the origin requirements are applied in one or two production stages. But under the newly signed CPTPP, Vietnam must meet requirements in three stages, i.e work in the three stages must be implemented in CPTPP member countries.

Meanwhile, it is difficult for Vietnamese enterprises to make yarn-forward materials because they cannot find premises for factories.

Later, the group got the nod from Thai Nguyen provincial authorities to set up a factory there. However, the Ministry of Natural Resources and the Environment rejected the project for fear that the waste water would harm the environment.

Meanwhile, Vietnamese enterprises do not have enough capital to run weaving & dyeing factories.

“As such, the question about textile & dyeing industry development remains unsolved,” Mai said.

According to Pham Xuan Hong, chair of the HCMC Association of Textile, Garment, Embroidery & Knitting, 90 percent of fabric is imported from China, Taiwan and South Korea, while 80 percent of yarn is from the US, West Africa and India.

The General Department of Customs (GDC) reported that in 2018, the country imported $23.91 billion worth of textile & garment and footwear materials, an increase of 13.9 percent over 2017.

Vitas estimated that the textile & garment industry uses 820,000 tons of materials and accessories each year, 70 percent of which is from China. If Vietnamese enterprises continue importing materials from China, they won’t have opportunities to exploit the preferences offered in CPTPP and EVFTA.

The lack of Vietnam-made materials is not the only difficulty. Hong said garment companies have been facing a labor shortage over the last few years.

Vietnam now has to compete with strong rivals such as Bangladesh, Pakistan and India which have been upgrading their production capability. If Vietnamese enterprises cannot improve production and increase productivity, they will be the losers.

The biggest advantage Vietnam holds in the competition, according to Hong, is the politico-economic stability, which reassures investors.

Vitas hopes it can export $40 billion worth of textiles and garments this year, an increase of 10.5 percent in comparison with the $36.2 billion in 2018. Foreign invested enterprises made up 70 percent of Vietnam’s textile & garment export turnover in 2018.