According to the ministry, real estate businesses were issuing corporate bonds to raise capital due to difficulties accessing loans from banks. The State Bank of Viet Nam has issued policies to restrict loans for the property sector, aiming to reduce bad debts in the sector.

Some real estate businesses had issued corporate bonds with high annual interest rates of up to 14.5 per cent, the ministry said.

This would create unsafe capital flows in the real estate market, it said.

Chau said in 2019, property enterprises’ total corporate bond issuances reached VND106.5 trillion, of which 84.2 per cent of those enterprises attracted capital equal to only one third of equity. The average interest rate of corporate bonds was 10.3 per cent, similar to bank interest rates.

In the first quarter, 33 real estate enterprises issued corporate bonds with a total value of VND23.2 trillion, up 9.8 per cent year-on-year, and equal to 18.3 per cent of the total corporate bonds issued last year, it said.

According to the Ministry of Construction (MoC)’s quarterly report on the domestic real estate market released on Thursday, successful property transactions in the first quarter of this year decreased by 60 per cent from the same period last year.

The number hit a four-year low due to many difficulties, including the strong impacts of the COVID-19 pandemic, the ministry said.

The market witnessed 13,042 successful transactions of properties ranging from apartments, houses and land to condotels and resorts/villas in the first three months of the year.

Of which, Ha Noi sold a total of 1,167 apartments, houses and land lots, while HCM City made 2,816 successful transactions, down 62 per cent and 45 per cent, respectively.

There were 56 apartment projects with 20,536 units licensed from January-March, while 997 others with 233,313 units were under construction. The number of apartments completed reached 18,061, the report said.

The report said the progress of many projects had been seriously hampered by precautions and the nationwide social distancing order to curb the spread of the COVID-19 pandemic.

Prices of condominiums in Ha Noi and HCM City during the first quarter rose by about one per cent and 3.5 per cent, respectively, year-on-year, while those for tourism properties remained unchanged. Rental rates of retail spaces fell by 10-30 per cent compared to the pre-pandemic period.

Meanwhile, prices of industrial properties continued on an upward trend, surging 6.2 per cent during the period.

In a document to be submitted to the National Assembly in the May session, the ministry forecasts the domestic real estate market this year would face many difficulties, leading to a continued reduction in transaction volume and supply against last year.

The market has a surplus of middle and high-end housing but a shortage of social housing and low-cost commercial housing. Meanwhile, demand for affordable and low-cost housing with a price of under VND25 million per sq.m accounts for 70-80 per cent of domestic market demand.

The ministry has proposed strict control of licensing for new investment projects in the property sector, especially resorts, villas and high-end apartments to avoid a high inventory in the high-end segment.

Localities needed to review slow real estate projects to adjust property market development plans according to demand, or withdraw projects that are unable to continue. — VNS

The HCM City Real Estate Association (HoREA) has asked for corporate bond regulations to be loosened to help businesses get through the COVID-19 pandemic, local media have reported.

The corporate bond market had seen exponential growth in recent years as banking credit for several sectors was narrowed, forcing firms to shift to bond issuance to raise capital. 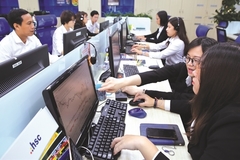