Though many suburban shopping centers were handed over three to five years ago, they remain deserted. Tens of thousands of square meters of commercial premises have been left idle.

The apartment project on Le Trong Tan street in Hoai Duc district in Hanoi was handed over in late 2016. The buildings there are designed in five blocks to be used as shopping centers with total floor area of 20,000 square meters. 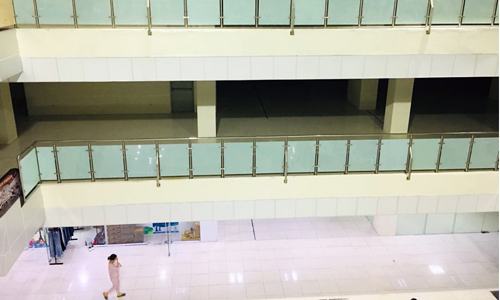 The project’s investor once planned to divide the area into small shops and kiosks for sale. However, distributors did not show interest though they could get preferential loans.

Not far away, there is another building in the same situation. Hundreds of kiosks and shophouses on three commercial floors of the building remain deserted.

The investor of the project many times opened the kiosks and shophouses for sale at the price of VND12-14 million per square meters (50-300 square meters) together with apartments.

However, two of the commercial floors there remain unsold. Meanwhile, some kiosks have had to shut down after a period of operation because of the lack of custom.

At a project on To Huu street, the kiosks are still on sale, but very few people are interested in them. The commercial area on the first floor is not fully occupied.

According to Ngoc, a real estate broker who has deep knowledge about the western part of the city, the unprofessional operation of the investor is one of the reasons behind the lack of sales.

The slump is not only seen at the projects in suburban areas, but also at ones near Belt Road No 3. The project on Pham Van Dong Road which has been operational for the last two years is an example.

The first floor of the project is not fully occupied, while tens of thousands square meters on the upper floors remain unused.

According to JLL, the demand for retail premise leases grows steadily, but the commercial areas in apartment projects in suburban areas have a very low occupancy rate.

JLL believes that the investors of the projects lack experience in developing retail real estate. They do not have the ideas and business models suitable to the scale, area and characteristics of the projects and the surrounding areas.

Pham Duc Toan, CEO of EZ Vietnam, a real estate investment and development company, also thinks that some investors lack experience in assessing the potential of the commercial premises segment.

The commercial areas in suburbs mostly serves residents in buildings, so it is difficult to attract clients to the second and higher floors. And some investors will reserve up to five commercial floors.

Japanese retailers are increasingly amplifying business activities in Vietnam as the country’s middle class expands amid market conditions in their home country slowing down.