US chicken dirt-cheap in Vietnam

Vietnam has increased imports of chicken from the US which have the surprisingly low price of VND18,000 per kilogram.

According to the General Department of Customs (GDC), by the end of June, Vietnam had imported 62,400 tons of chicken from the US, worth $48.6 million. 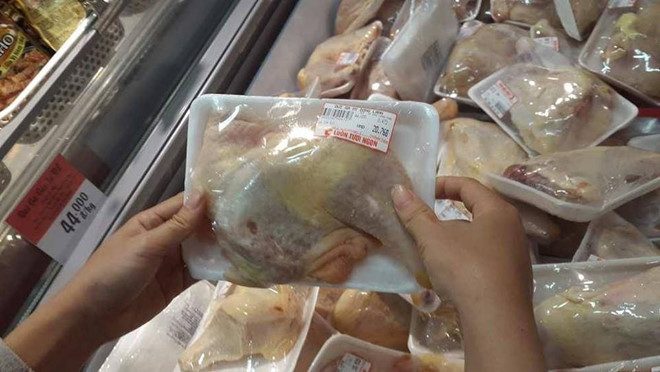 Nguyen Xuan Duong, acting director of the Livestock Department of the Ministry of Agriculture and Rural Development, said that the imported American chicken products are not up-to-standard but are just seconds in the US, and can be imported at very low prices.

In the US, chicken legs, wings and thighs are used to process bone powder for animal feed. However, these products are favored in Vietnam and are imported as food for humans.

Nguyen Tat Thang, secretary general of the Vietnam Livestock Association, agreed with Duong, saying that in western countries, including the US, chicken breast is the most favored and the most expensive, while thighs, legs and wings are not.

Nguyen Dang Cuong, director of Lucavi, a farm produce import/export company, denied that the imports from the US are cheap because they cannot meet standards on safety. The problem just lies in the different tastes between Vietnamese and American consumers.

Some experts affirmed that American chicken is cheap because of the competitive production cost.

According to Cuong, one kilogram of kitchen live weight has the production cost of VND15,000, while it is over VND20,000 in Vietnam. This is attributed to the cheaper animal feed in the US. The price of soybeans in the US, for example, is VND9,000 per kilogram, while it is VND16,000 in Vietnam. Meanwhile, soybean accounts for 15 percent of total food rations.

The feed conversion ratio in chicken production in Vietnam is 1.6, meaning that when farmers feed chicken with 1.6 kilogram of feed, they will get 1 kilogram of chicken weight gain. The figure in the US is 1.4 or 1.2.

The advantage of US farming also lies in the farming scale and technology. A farm in the US has 100,000 fowl, or even millions of fowl. Meanwhile, a hi-tech farm in Vietnam would be enough for only 10,000-20,000 fowl.

The large imports of US chicken to Vietnam have raised concern about the fate of the domestic fowl industry. Vietnam’s chicken products cannot compete with the US in price.

However, Duong denied this, saying that with the current imports, the livestock industry won’t suffer heavily. Also, Vietnamese prefer indigenous chicken species, not the chicken popular in the US.

Close cooperation between companies, co-operatives, farms, and households is needed to restructure the livestock industry, the Ministry of Agriculture and Rural Development has said.