As the third largest seafood exporter in the world, Viet Nam's could lose about US$480 million per year if it fails in its fight against illegal, unreported and unregulated (IUU) fishing. 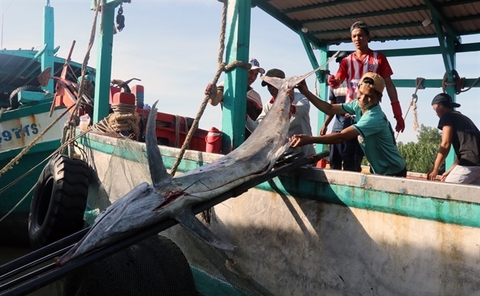 Poor facilities on fishing vessels and limited and inconsistent sanctioning of fishing violations are among what Viet Nam must end to remove the IUU yellow card.

The Viet Nam Association of Seafood Exporters and Producers (VASEP) and the World Bank on Tuesday announced its latest report on the economic impact if Viet Nam fails to obey regulations set by the European Commission.

According to the report, fishery and aquaculture commodities represent Viet Nam’s fifth largest export, accounting for about 4 per cent of the country’s exports in 2018. In recent years, Viet Nam’s seafood exports have reached close to US$8.5 - 9 billion per year, of which aquaculture represents 60 to 65 per cent and fishing 35 to 40 per cent.

While Viet Nam prioritised the development of sustainable fisheries, the local fishing sector has been issued a "yellow card" over IUU fishing, by the European Commission (EC) since 2017.

Among the products, squid, octopus and cuttlefish plunged the most with a 37 per cent drop, while clams, oysters and scallops decreased 11 per cent, tuna by nearly 2 per cent and crabs by 11 per cent.

The association said the downward trend continued in 2020, especially due to the combined impact of the pandemic, IUU yellow card and Brexit: “Viet Nam’s seafood exports witnessed a decrease of 5.7 percent, equivalent to a turnover of only US$ 959 million, compared to 2019.”

According to VASEP, Viet Nam went from being the second largest seafood import market for the EU to the fourth largest, after the US, Japan and China.

The association said the EU was still a dominant world market and could create a ripple effect in other markets, including important partners for the local seafood market, thus the country could risk losing access to the EU market and being issued a "red card" from the EC for the failure in addressing IUU fishing.

VASEP has worked with partners on a 60-page report covering local seafood production; market regulations on IUU Fishing; overall assessment of trade fluctuations between 2017-2019 to assess the impact of the IUU yellow card; and the estimated short-term and medium-term economic impacts of receiving a red card.

The analysis revealed that fishing was directly affected by the IUU regulations and carding process, while aquaculture was subject to an indirect impact.

It was estimated that the Vietnamese fishing sector could lose around US$387 million per year.

At the same time, the indirect impact for aquaculture stems from an increasingly negative reputation, the increasing burden of customs control, and missing opportunities to take advantage of the Viet Nam- European Union Free Trade Agreement's preferential tax levels. In this case, Viet Nam’s aquaculture sector could lose around US$93 million.

If the ban lasted for between two and three years, it would mean disruption of the Vietnamese seafood sector with a decline of at least 30 per cent in earnings for fishing.

By reviewing the new challenges faced by the seafood sector as a result of the pandemic, the report said by addressing the IUU yellow card and taking advantage of other opportunities, Viet Nam could minimise the impact.

The report said: “If Viet Nam can remove the IUU yellow card soon, take advantage of tariff preferences and institutional changes from EVFTA, and the opportunity to recover and grow back in the EU market, it would be feasible for Viet Nam to achieve exports of around US$1.2-1.4 billion in the coming years.”

The report said solutions to remove the yellow card could bring the fishery industry closer to achieving the annual growth target of seven to nine per cent in exports and reaching $16-18 billion for export by 2030 as well as contribute to the development of sustainable fisheries.

In January 2019, the EU officially announced the removal of the yellow card for Thailand in recognition of the significant progress it had made in addressing IUU fishing since 2015.

Viet Nam is the fourth largest seafood producer in the world and the third largest exporter of seafood. The local seafood products reached more than 160 markets and had a firm foothold in many large and demanding markets such as the US, Japan, EU and South Korea.

In July, Deputy Prime Minister Le Van Thanh announced that the country was determined to gradually reduce the number of fishing vessels violating IUU regulations and hoped to have the yellow card removed by 2022.