Vietnam expected to cut policy rate in second half of 2020: HSBC

The need to ease policy rates in the near-term is unlikely, given the country’s still-robust growth and heightened foreign direct investment.

As global demand continues to fade, the State Bank of Vietnam (SBV), the country's central bank, is expected to provide some form of stimulus to growth, with a 25-basis-point cut to the policy rate on the cards in the second half of 2020, according to HSBC in its latest report.

This would bring the refinance rate down to 6% by end-2020, which is a collateralized lending rate through which the SBV provides short-term loans for credit institutions, stated the report.

Notably, the SBV was the only regional central bank not to tighten policy last year, however, Vietnam is expected to eventually follow most countries’ easing cycle once global trade data wanes as a result of weaker global growth.

Nevertheless, the need to ease policy rates in the near-term is unlikely, given the country’s still-robust growth and heightened foreign direct investment. 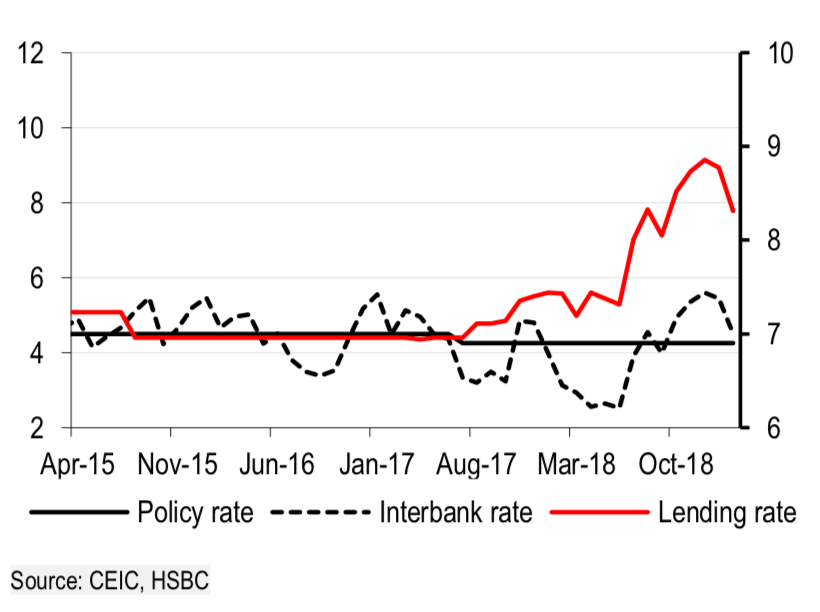 In addition to controlling the rates at which SBV lends to banks, the SBV also has various benchmarks intended to control broader lending rates, with a focus on ensuring banks do not charge excessive rates to the real economy. This reflects the central bank’s credit growth mandate, targeting 14% in 2019, which is unchanged from the previous year.

​Monetary policy transmission in Vietnam relies primarily on its two lending facilities: the refinancing and discount facilities. Both are collateralized facilities, which form the upper and lower-bound of market lending rates from the SBV. This is also the band within which the rate for open market operations (OMO) move. OMO began in 2000 and take the form of outright sales and purchases of securities or repo agreements.

It is also important to mention that the SBV manages the local exchange rate, which it has been guiding on a very gradual depreciation path. The central bank does not appear to use the FX to boost growth or exports, and instead focuses on external stability.

However, in 2018 as the central was selling USD reserves to support the currency, liquidity in the financial system tightened sharply, putting upward pressure on lending rates even in the absence of a move in the policy rate.