Vietnam has made it among the 45 largest economies on the globe thanks to tremendous achievements in socio-economic development. 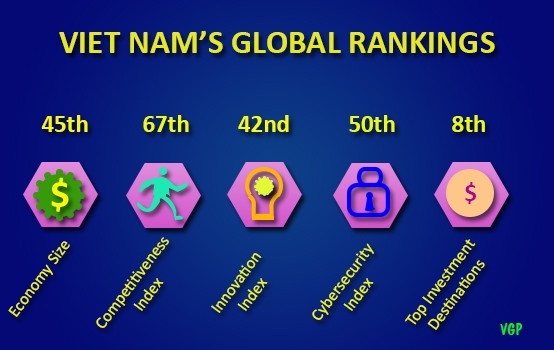 Vietnam has always been one of the countries with the highest speed of growth in the world since attaining middle-income status in 2010, according to Minister of Planning and Investment Nguyen Chi Dung. Average GDP in 2011-2018 was always higher than 6.2%. At the end of last year, the country's GDP reached over US$250 billion while GDP per capita was $2,600.

Vietnam jumped 10 notches to 67th out of 141 economies on the global competitiveness ranking, according to the 2019 Global Competitiveness Report released by the World Economic Forum (WEF).

With the latest ranking, Vietnam is the country whose score improves the most globally, says the report.

The Southeast Asian country scored 61.5 points, up 3.5 points compared to 2018. This is Vietnam's highest ranking so far.

Vietnam has jumped three ranks on the 2019 Global Innovation Index (GII) to place 42nd out of 129 economies around the world.

With this jump, Vietnam has leapt 17 spots since 2016. This year’s result is also the highest ranking Vietnam has ever achieved.

Vietnam ranked 50th on the Global Cybersecurity Index (CGI) rankings in 2018, up 50 places from a year earlier, according to a report by the International Telecommunications Union (ITU).

With a score of 0.693, Vietnam ranked 11th in the Asia-Pacific region, which was topped by Singapore, Malaysia and Australia.

The Southeast Asian country’s outstanding performance has exceeded the initial target of climbing to the 70th position.

U.S. News & World Report released the ranking of the best economies to invest in 2019, in which Vietnam surpassed its Southeast Asian peers including Malaysia, Indonesia, and Singapore to rank eighth compared to 23rd last year.

According to the report, economic policy reforms initiated in 1986 have helped turn Vietnam into a more modern, competitive nation.

Vietnam’s continued efforts to lessen international isolation are shown by joining of the World Trade Organization in 2007 and participation in free trade negotiations with the Trans-Pacific Partnership in 2010. VGP