A key strength in Vietnam’s business environment is the country’s proliferating membership of free-trade agreements. 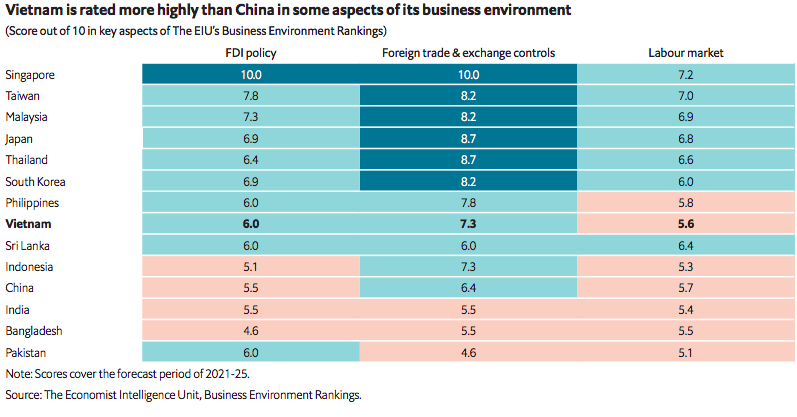 A low-cost manufacturing base and internal political stability are among key factors that turns Vietnam into a rising star in the region’s shifting supply chains, the Economist Intelligence Unit (EIU) of the Economist Group stated in its latest report.
\However, “the main weakness that investors will find in Vietnam’s labor market will continue to be its lack of skilled labor”, stated the report, referring to the lack of advanced education directly relevant to the needs of foreign-invested manufacturing and services firms.

As such, eligible FDIs can benefit from corporate, personal income tax exemption and rate reduction, while below-market land rents are offered as well.

Firms in high-technology sectors, automotive, machinery, and those involved in the production of advanced capital goods are among the eligible.

“In the decade ahead, the eligibility for investment incentives will narrow to increasingly focus on higher value-added industries, as the government deprioritizes foreign investment in low-value-added manufacturing industries, including chemicals, plastics and fabricated metals,” noted the report.

Meanwhile, Vietnam participates in more trade pacts, with the latest being the EVFTA and RCEP, and has better relations with major trading partners than many of its regional neighbors. This lowers the cost of exporting clothing, footwear and electronics, among other goods, to major global markets.

“The wide range of incentives offered to foreign businesses and market access granted by numerous free-trade agreements, combined with competitive wage costs at the low-skilled end, will ensure Vietnam remains an attractive option for manufacturing operations and those seeking to diversify their supply chain in Asia,” noted the EIU.

According to the EIU, Vietnam’s geography is well-suited to export-driven activity. It has a long coastline that supports several deep sea ports and navigable rivers that reach into major urban centers, including Thai Binh in the north, and Ho Chi Minh City in the South.

"This advantage compensates for, and partly explains, a dearth of high-capacity connections between the north and south of the country," it noted.

Vietnam has worked to develop the domestic market with a population of nearly 100 million people in the context that the COVID-19 pandemic has disrupted the global supply chains, said Minister of Industry and Trade Tran Tuan Anh.