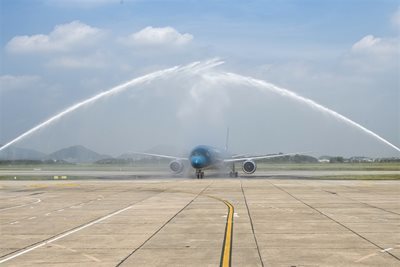 Vietnam Airlines has completed a study to assess the efficiency of regional jets which would be used to replace ATRs for some short-distance flights, in the context of small market capacity and domestic airports.

It is expected that the airline will have 6-20 aircraft of this kind.

It also plans to have 34 wide-body aircrafts under the hire-purchase mode. The airline will make decisions depending on the market situation.

The growth of the Vietnam’s aviation market has slowed down since 2017, while the growth rate was one digit in the first half of the year. Meanwhile, the competition in the domestic and international markets is getting fierce, which has led to airfares dropping.

At present, 72 international airlines and four Vietnam’s airlines, not including Vinpearl Air and Vietravel Airlines which are about to join the market next year, are exploiting 200 international air routes and providing chartered flights from 25 countries and territories to airports in Vietnam.

Vietnam’s airlines also have 155 regular routes and other charter points.

With the high number of air routes and fierce competition, Vietnam Airlines and other carriers such as Vietjet are considering developing fleets of narrow body aircraft to increase operation efficiency.

The new-generation wide body aircraft save fuel, but the efficiency is not high because of the stiff competition.

Many planes have recently had their tyres damaged after landing at the Noi Bai Airport.

The age of second-hand aircraft imported into Vietnam is among new regulations in the Government’s Decree 89/2019/ND-CP.