While the expansion of asset yields becomes more limited as the transition towards retail lending slows down and competition intensifies, the control of funding costs serves as a driver of interest income growth.

In order for Vietnamese banks to control funding costs, maintaining the current account and saving account (CASA) ratio will play an important part. This is a low-cost funding source (with a cost of only 0.1-0.5% annually) and with an adequate growth rate, and able to offset the increase in expenses for term deposits and bond issues, according to Viet Dragon Securities Company (VDSC).

Since 2018, stricter regulations on funding (Basel 2, the ratio of short-term capital to fund medium and long-term loans) have been expected to have a negative impact on banks' net interest margins as banks will have to push long-term bond issuance as well as compete for customer deposits by raising interest rates.

While the expansion of asset yields becomes more limited as the transition towards retail lending slows down and competition intensifies, the control of funding costs serves as a driver of interest income growth.

According to VDSC’s report, BIDV, VP Bank, MB Bank, and VIB are banks with a clear trend of decreasing CASA since the end of 2017, coupled with the upward move of funding cost. Meanwhile, CASA increased strongly in Vietnam Technological and Commercial Joint Stock Bank (Techcombank), leading to an encouraging improvement of funding cost in the first half of this year.

To increase CASA, many banks around the world has developed a modern payment management system (transaction banking), capable of serving customers’ needs to push the number of transactionsettlements. According to Nielsen's Personal Financial Supervision Report in the fourth quarter of2018, the most important factors for banking services are convenience, ease, agility and transaction fees. As such, a platform that can satisfy those criteria will encourage customers to make transactions, which will help increase the demand deposit balance accordingly.

In Vietnam, digital banking has become a trend amongst banks, with various fee promotion initiatives to encourage customers to use digital payment, thereby improving CASA.

Techcombank can be considered the first private bank to focus on building digital and payment advantages with the goal of becoming the main transaction bank. Since September 2016, many fee promotion policies for customers have been applied such as free transactions on e-banking/mobile banking, free account management fee if the average monthly balance reaches VND2 million (US$86.16), or unlimited cash back.

Thanks to these policies, Techcombank has risen to the top position in mobile payment with a 33% market share by the first half of 2019. The number of customers using Techcombank e-banking during the period was more than two million, nearly doubled year-on-year. Along with that, CASA improved continuously from 22.7% in 2016 to 30.4% at the end of the second quarter of 2019.

Many other private banks also adopted their own fee exemption campaigns. In 2018, VIB has a policy of free transfers and cash withdrawals for new customers or payment accounts satisfying a certain minimum account balance. The bank also offers no services fee and cash back for customers of some new account packages. Similarly, in 2019, Asia Commercial Bank (ACB) has a fee exemption campaign on mobile banking applications (definite or indefinite depending on the account classification).

However, it should be noted that by these initiatives banks will have to sacrifice a part of their service fee income for CASA ratio. Fee exemption policy limits the growth of settlement income and refund policy escalates the growth of settlement expense. For Techcombank's case, income from payment activities in 2018 increased by 20.3% year-on-year while the cost from payment activities increased by 86.5% year-on-year. The corresponding growth rates for the first half of 2019 are 22% and 152.8%.

As a result, Techcombank's net income from payment only increased insignificantly compared to other banks. Also according to Techcombank, the current cost of funds saved by increasing CASA mostly equals the increase in payment costs, which means there is no direct profits from these initiatives. As such, potential gains should be indirect and in the long run, such as expanded customer base and strengthened customer loyalty.

Currently, MB Bank and Joint Stock Commercial Bank for Foreign Trade of Vietnam
(Vietcombank) are two banks with the highest CASA ratio and lowest funding cost in the sector.

However, the competition for CASA will become more intensive because of deeper penetration of private banks. The investment in digital banking and promotion initiatives, on one hand can support CASA ratio, but are also likely to raise operating cost and settlement expense. Therefore, banks will need to have effective investment and competitive strategies to maintain CASA while securing long-term benefits. Hanoitimes

Deputy CEO of VietinBank Tran Cong Quynh Lan believes that AI is important for banks, but how to apply it remains a difficult question.

How big are Vietnamese banks? 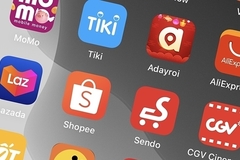 Shopee and Lazada have successfully controlled most of the Southeast Asian market. But in Vietnam, Tiki, Sendo and The Gioi Di Dong are preventing them from doing so.