Vietnam’s steel industry is facing 47 anti-dumping and anti-subsidy investigations from importing countries, accounting for one-third of the total cases of Vietnamese goods, according to a report from the VN Trade Defence Department. 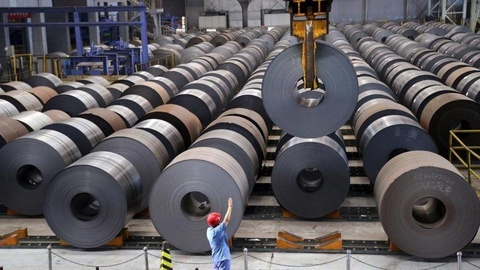 Steel is subjected to the highest number of trade defence investigations in the world because it is produced by many countries and is considered a product related to national security. — Photo diendandatdai.com

According to Pham Chau Giang, deputy director of the department, steel is subjected to the highest number of trade defence investigations in the world because it is produced by many countries and is considered a product related to national security.

“After the US, other countries such as Canada, Turkey and EU have also launched investigations to apply safeguard measures to the entire steel industry. That is not to mention the fact that other countries have increased the number of anti-dumping and anti-subsidy investigations of specific steel items and specific countries,” Giang said.

According to the Organisation for Economic Co-operation Development (OECD), the global oversupply of steel was nearly 900 million tonnes in 2017, most of which came from China.

Giang said the oversupply was caused by the slowdown of the world economy, which resulted in losses for many steel enterprises, and by the return of trade protectionism.

In addition, the MoIT has also co-operated with the Vietnam Steel Association and export enterprises to prove that Vietnamese exporters do not dump and do not receive subsidies from the Government. "Many investigation cases have been conducted, but not all are subject to taxes, so they still could export," he said.

“This result does not only benefit businesses who are facing investigations, but also creates a positive precedent for fighting against similar cases in the future, especially in the context of protectionism, which has increased in the world,” Giang added.

In the domestic market, Viet Nam has taken action to protect its domestic market, which is facing pressure from China’s low-quality steel products, which are prevented from export by some countries but can spill over into Viet Nam.

Giang said the Trade Defence Department was in the process of finalising the "white book" on trade barriers for steel products, which is expected to be announced at the end of the second quarter this year.

It focuses on strengthening policies and institutions and improving enforcement of legal provisions on trade defence to support them.

According to the ministry, anti-dumping, anti-subsidy and safeguard measures are permitted by the World Trade Organisation (WTO) and free trade agreements, and countries are allowed to establish an equal competitive environment by supporting domestic industries.

In the context of Viet Nam's deep integration into the regional and global economies, trade defence measures have become an important policy tool contributing to enhancing the efficiency of the economic integration process, it said.

It said it would focus on building government management agencies’ trade defence capacity and strengthening protection of industries.

The tasks would be concretised into specific programmes and activities to achieve the main objectives of supporting development and improving the productivity and competitiveness of domestic industry and making use of favourable conditions in free trade agreements, it added.

The ministry’s Department of Trade Defence will be entrusted with co-ordinating with relevant agencies to carry out the master proramme. — VNS