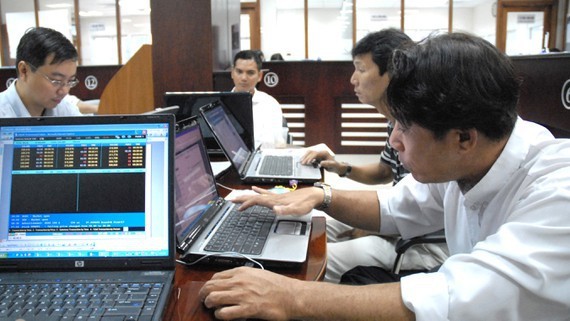 Many securities companies forecast that the Vietnam’s benchmark VN-Index will verify the threshold of 1,100 ± 30 points before the lunar New Year.

After the State Bank of Vietnam (SBV) lowered interest rate in mid-September this year, it has positively affected the stock market. On September 30, the VN-Index sometime touched 1,000 points in the trading session and temporarily retreated from this mark at the end of the trading session. However, securities experts forecast that the market will surpass this threshold at the beginning of October.

Experts said that cutting benchmark interest rate will bring cheaper capital costs for banking sector if they continue to keep output interest rate. In fact, after SBV reduced interest rate, banking shares have highly grown. Of which, shares of Vietcombank (VCB) have continuously broken new record high in the past month.

Representative of VNDirect Securities Company said that the fact that the central bank reduced its benchmark interest rate will also affect the economy and especially banking shares, so it is understandable when banking shares go up. However, leading stocks like VCB have positive long-term tendency, other banking stocks have recoverability while they are still in previous medium term downtrend. Moreover, at the present, the cash flow has not been strong enough while banking shares need a large number of cash flows to create a strong growth so it is difficult to expect too much during this time.

Senior researcher of the Market Strategy of MBS Securities Company also said that banking stocks accounted for 25 percent of market liquidity in trading value. Therefore, in order for the market to conquer important psychological resistance, the role of banking stocks is indispensable. However, as for the momentum of growth, it is still a separate story of each bank which is not expected to spread throughout the banking sector. For instance, selling capital for foreign partners has helped shares of MBB and VCB to post growth this year. Besides, although business results were forecast to be not as high as those in previous year, some banks have used thousands of billions Vietnamese dong to buy treasury shares, thereby supporting growth rate of banking shares in the future.

Representative of Agriseco Securities Company said that banking stocks in the market have been showing good performance and been divided strongly but they are unable to generate waves at this time or perhaps, only some middle range banking stocks can. Because the crucial factor for this group to create waves is large cash flow. However, according to observers, this cash flow has been standing apart from the market since the beginning of this year unlike it did in the past two years.

Not only banking shares but also current market developments showed more optimistic signs than negative ones. The trade war between the US and China cooled down with concessions from both sides. In September this year, the US Federal Reserve also cut its benchmark interest rate by 0.25 percent with a message of more possible interest rate cut in the future. Other central banks in large countries have also applied the economic stimulus programs by lowering interest rate, including the State Bank of Vietnam, showing that the economy is expected to boost growth at least from now till the end of this year.

Amid the thriving economy, the Government has presented several development supporting policies. New generation free trade agreements have been bringing into play their efficiency. Direct and indirect investment value has been sharply increased in the past few years. These proved that growth cycle of Vietnam has been maintained. Last week, the market received another positive information that gross domestic product of Vietnam in the first nine months of this year reached 6.98 percent over the same period last year, the highest level in nearly a decade. With this information, large cash flow will confidently pour into Vietnamese market.

The VNDirect Securities Company said that the fact that Fed lowered its benchmark interest rate will positively affect frontier and emerging stock markets, including Vietnam. Then, the pressure of a stronger US dollar will be minimized, stimulating investment cash flow to return to these markets. Fed might lower interest rate for one or two more times this year, thereby encouraging foreign cash flow to return to Vietnam’s stock market since the beginning of the last quarter of this year. This will be the factor that backs the recovery of the market in the last months of this year. At the same time, the drop in US dollar interest rate has also eased concerns about the withdrawal of international capital flow from Vietnamese stock market.

In addition, according to analyses of securities companies, macro-economic environment has been adjusted to the right trajectory. Once economic growth is maintained, not only stock groups with growth synchronizing with economic cycle, such as banking, finance, technology, pharmaceuticals, telecommunications and automobiles but also value and basic industries like insurance, finance and gas and oil will also benefit it. SGGP

Vietnam’s benchmark VN-Index could breach the 1,000 point mark in the last quarter of the year after the Q3 corporate earnings season and with investors shifting attention towards firms with hopes for full-year earnings growth.