Vietnam’s vegetables and fruits are finding it difficult to enter China, but the country continues to import Chinese products in large quantities.

The General Department of Customs (GDC) reported that export turnover of vegetables and fruits to China, the biggest market for Vietnam, dropped sharply by 44.2 percent in July to $144.2 million. 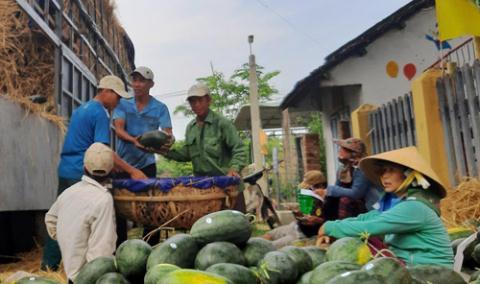 As such, in the first seven months of the year, exports to China witnessed a decrease of 8.1 percent in turnover in comparison with the same period last year to $1.6 billion.

However, while China has restricted imports from Vietnam, it still exports vegetables and fruits in large quantities to Vietnam.

Together with Thailand, the US and Australia, China is among the four biggest suppliers for Vietnam.

Vietnam spent $270 million to import products from China, a sharp increase of 58 percent compared with the same period last year.

Nguyen Van Nam, former director of the Trade Research Institute, though emphasizing that the real figure could be higher because some products still can be exported across border gates, commented that the situation has become worrying.

However, China has changed its trade policy in recent years, boosting imports through official channels and reducing imports across border gates.

The move shows China clear policy: when the economy was in low development, it opened the market to facilitate Chinese businesses and help them make profits, but now it is at a higher development level and has tightened management over imports.

How about Vietnam? Ministries, in all resolutions and legal documents, affirm that Vietnam encourages trade through official channels, but has no detailed and clear policies to reach that goal.

Since Vietnamese farmers and businesses are used to cross-border exports, they did not immediately adapt to the new circumstances when China restricted cross-border imports and tightened control over the quality of imports.

Some experts have called on Vietnam to tighten control over Chinese imports, saying that it is unfair for Vietnam to unilaterally open its market widely.

Many of Vietnam’s agricultural products – especially rice, vegetables and cassava – have faced barriers preventing their export to China, according to the Ministry of Agriculture and Rural Development.

Promoting Vietnam’s popular destinations and tour activities at source markets, especially China, is one of the solutions suggested by Minister of Culture, Sports, and Tourism Nguyen Ngoc Thien.