The banking growth model of rapid credit growth to the corporate sector will transform in the one which focuses more on household lending and fee income as corporates tap into the bond and equity markets.

Vietnam’s economic growth has been mostly fueled by foreign direct investment (FDI) and credit but those two are not long-term solution. The country’s leadership is well aware of that and seems committed to developing its capital markets, according to Viet Dragon Securities Company (VDSC).

Over the past few years, “Vietnam’s capital market is small, unsophisticated and remains hard to access particular for overseas investors,” stated VDSC.

Nevertheless, Vietnam is expected to witness significant financial deepening in the next decade, while the country is the only in Asia excluding China where bank credit exceeds the sum of listed bonds and equities. Credit provided by the financial sector has grown from 21% of GDP in 1997 to 142% 20 years later. Such growth rates are unsustainable for Vietnam, VDSC commented.

Capital markets can offer a solution in diversifying corporate financing. As a result, the banking growth model of rapid credit growth to the corporate sector will transform in one which focuses more on household lending and fee income as corporates tap into the bond and equity markets.

According to VDSC, there are early signs of that already with significant growth in consumer and mortgage lending in recent years.

The total market capitalization rose 230% over the past five years and is expected that over the next five years, the value of equities (now US$190 billion) could double and Vietnamese stocks will be added to the MSCI Emerging Market Index, not to mention the growth potential of the bond market, in which over 90% of all bonds are government issued. 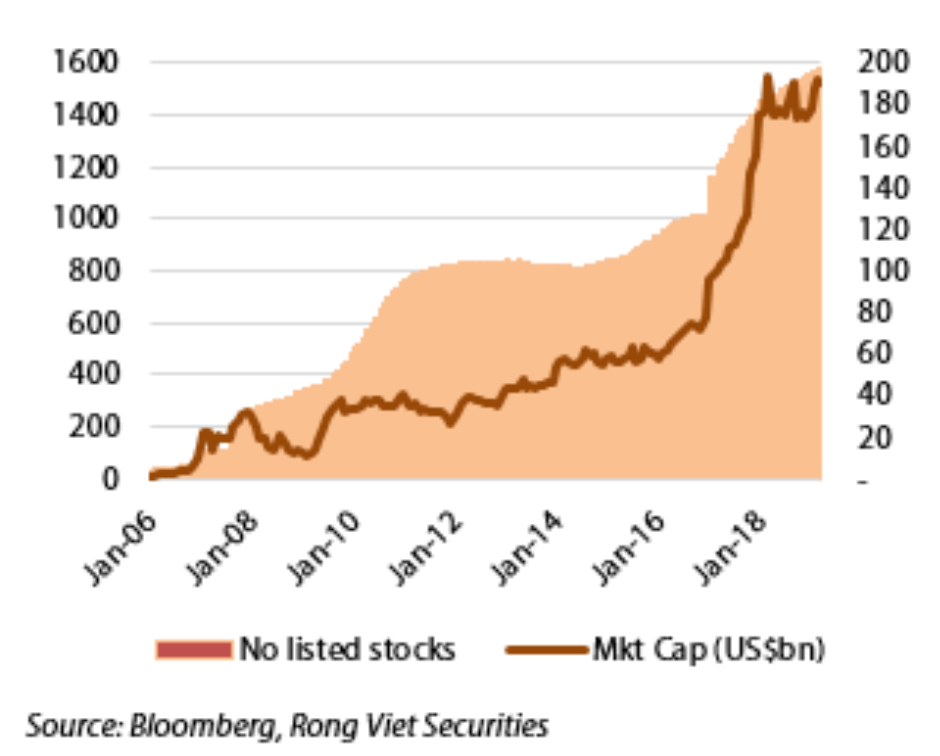 In 2017, the country’s first four VN30 index futures contracts were introduced. After a hesitant start, these products quickly became popular amongst speculators for obvious reasons.

Daily trading value ranged between US$250-400 million recently, higher than the US$200-250 million on the stock market nowadays. Meanwhile, the Ho Chi Minh City Stock Exchange (HOSE) hopes to introduce covered warrants for a number of blue-chip stocks within this year.

As for the large banking sector, there are some concerns as Basel II requirements are not yet met by all banks, non-performing loans (NPLs) remain relatively high and lenders rely too much on interest income for profits. The first can be solved via recapitalization. In fact, if foreign ownership limits are being relaxed, that should be fairly easy.

Risk management however remains in its infancy and needs more serious consideration. At a time where most of bad loans from the previous credit cycle have been dealt with, there are potential areas of new NPLs including consumer finance.

A positive development is the step by step move towards more fee-based revenue. Caution is advised, but VDSC expected long-term bullish on the sector while bank stocks remain an excellent proxy for the economy.
​
Lack of liquidity and breadth means that stocks which may be attractive are not in high demand and remain undervalued while when foreign capital flows in, those stocks with better liquidity can become more overvalued.