Despite the COVID-19 pandemic, trade revenue between Vietnam and other ASEAN countries has still been on the rise, but much still needs to be done to fully capitalise on these neighbouring markets.

Trade between Viet Nam and other ASEAN nations has surged over the past years, from merely US$3.5 billion in 1995, when the country became a member of the bloc, to $42 billion in 2015 and $53.6 billion in 2020. Last year’s figure accounted for 9.8 per cent of Viet Nam’s total trade turnover.

ASEAN is a large market with a combined population of nearly 700 million, a growing middle class, lifestyle and cultural similarities, and geographical proximity among member nations. Given this, Viet Nam still has much room to boost exports to regional countries.

Indonesia, Thailand, and the Philippines are the biggest importers of Vietnamese goods at present. While Thailand prefers dried fruit and apparel for tourists, the other two have high demand for power generators, water pumps, and telecoms devices from Viet Nam, according to Nam.

Many other Vietnamese products also hold great potential for export to these destinations such as items of the processing and manufacturing industry, mobile phones, computers, electronic devices, tea, garments and construction materials.

However, experts held that Vietnamese enterprises have yet to take full advantage of the ASEAN market.

Over the last 10 years, the country has continually recorded a trade deficit of $6-7 billion, equivalent to 30 per cent of total export value, with this market.

Data of the General Statistics Office (GSO) show that the deficit stood at around $8.6 billion in the first seven months of 2021, shooting up 123 per cent from the same period last year.

To fuel shipments to this region, a GSO official suggested that Viet Nam should pay more attention to its policies on trade with regional countries while optimising advantages created by the free trade agreements between ASEAN and partners around the world.

It was also necessary to keep improving technology application to enhance the competitiveness of Vietnamese goods, step up trade in services and investment, and promote the country’s competitive edge.

As Viet Nam and some other ASEAN members share a high similarity of the product structure, it should actively engage in the shift of the capital flow within the bloc and cooperate with them to export goods to global markets, the GSO official said.

The Asia - Africa Market Department recommended Vietnamese firms proactively learn about each country’s demand and requirements to have effective approaches. 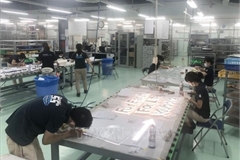