Just one week after the social distancing was loosened, a series of IZ projects kicked off. 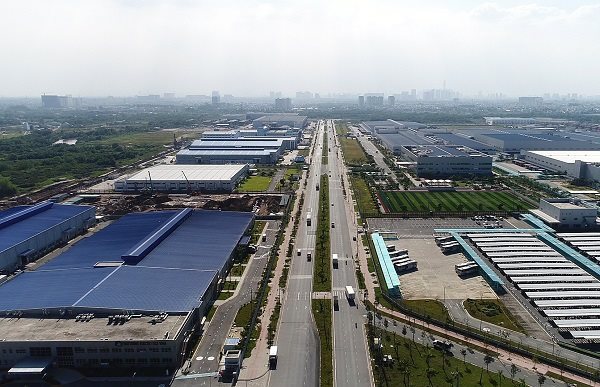 On May 14-17 groundbreaking ceremonies of two IZ projects in Long An province, Viet Phat IZ in Thu Thua district and Duc Hoa III in Duc Hoa district, were organized.

Of these, Viet Phat IZ, covering an area of 1,800 hectares, is one of the largest IZs in Vietnam.

Le Thanh, president of Tan Thanh Long An Company, the investor, said the US-China trade war and Covid-19 both have big impacts on FDI flow.

The Japanese government decided to reserve $2.2 billion in its record big bailout to help Japanese manufacturers relocate their production lines out of China.

“We began surveying the site and designed the investment when the US-China trade war was at its peak and before the Covid-19 epidemic broke out because we can anticipate the investment relocation wave,” Thanh said,

The escalation of the pandemic all over the world over the recent months has once again triggered the wave of relocating production bases out of China.

And once again, Vietnam has the opportunity to catch the investment flow. Therefore, businesses need to take action soon to prepare infrastructure for the new investment wave.

The belief that Vietnam will successfully catch the new FDI wave seems to be the reason for the industrial real estate segment to be immune from the real estate market crisis. All IZ developers are optimistic about profits and land rents.

According to Jones Lang LaSalle (JLL), the average land rent in IZs in the north is $99 per square meter, up by 6.5 percent over the same period last year, with the occupancy rate of 72 percent.

The northern market seems to attract all large corporations which want to set up new production bases in addition to existing ones in China. Northern provinces have good infrastructure conditions, while Hanoi, Hai Phong, Bac Ninh, Hung Yen and Hai Duong are near the Chinese 1.4 billion consumer market.

Meanwhile, in the south, the leading region in industrial production development, the land rent is about $103 per square meter, up by 10.3 percent over the year before, with occupancy rate of 82 percent. The figure has far exceeded the average 50-60 percent rate seen some years ago.

Meanwhile, Vietnamese economists are cautious when talking about the ability to attract investors, who are considering leaving China. Pham Sy Thanh, a respected economist, said Vietnam will have to compete with Indonesia, Malaysia and Thailand to attract the investors.