For every one percent of the yuan depreciation against the dollar, the price of Vietnam’s yarn export to China would lose 3 US cents per kilogram, analysts estimate.

However, Vietnamese enterprises are meeting difficulties when exporting to the market because Chinese importers try to force the export prices down to ease their losses caused by the yuan/dollar exchange rate fluctuations. 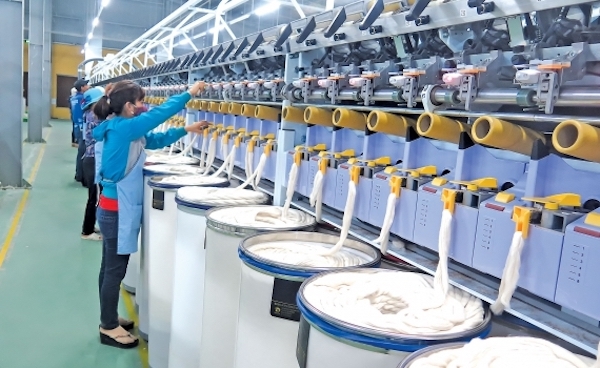 According to Vu Phuong Diep, deputy general director of Damsan JSC, previously, her enterprise exported 1,400 tons of yarn to China each month, but the export volume has decreased recently. Damsan has not obtained any orders for September.

“The export price has dropped dramatically. Yarn now can be sold at $2.4 per kilogram instead of $2.8,” she said.

“We don’t know if the US and China would take any more actions to increase the trade tensions between the two countries. Once tension occurs, our exports to China will stop,” she said.

Meanwhile, yarn exports to Taiwan saw the sharpest decline of 30 percent in both quantity and export turnover.

The Vietnam Cotton and Spinning Association (VCOSA) has predicted that exports in the last months of the year will see little improvement as importers are buyingat moderate levels.

Vietnam’s yarn exporters are concerned not only about export price reduction, but the Chinese yuan devaluation.

From June to the end of 2018, the Chinese yuan lost 7.8 percent of its value against the dollar, while the dollar/yuan exchange rate went down from 6.4 to 6.95 yuan per dollar. Meanwhile, the dong still stayed firmly against the dollar. This means that Vietnam’s yarn has become more expensive.

As such, if enterprises signed contracts with payment in Chinese yuan, they will suffer from currency depreciation as well.