Vietnam has been honored with four important prizes, including Asia’s Leading Destination, by the 26th World Travel Awards (WTA).

The World Travel Awards Asia and Oceania 2019 has been organized on Phu Quoc island, a popular tourist island off the southern Vietnamese province of Kien Giang.

At this year’s ceremony, Vietnam was honored with the title of Asia’s Leading Destination for the second year in a row.

Hoi An, a tourist city in the central province of Quang Nam and home to Hoi An Ancient Town – a UNESCO World Heritage Site, was named Asia's Leading Cultural City Destination./. VNA 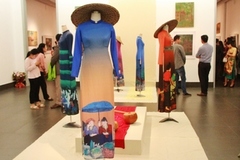 A performance with more than 1,000 Ao dai by 21 Vietnamese designers took place at the Temple of Literature in Hanoi recently. The program aims at honoring Ao dai as Vietnam’s intangible cultural heritage.