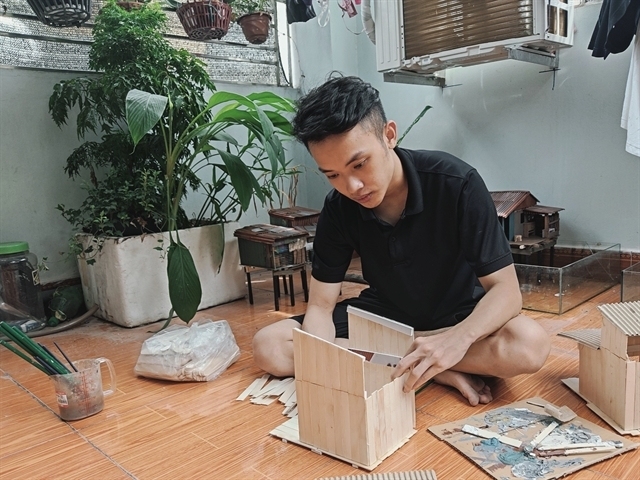 “I’ve been obsessed with aquarium decoration for a long time, but since I don’t have money to buy expensive items, I decided to make them myself,” the aquarium enthusiast told Viet Nam News.

“Modern house models have been done by so many people, so I wanted to do something different, and I decided to go with the old-style riverside houses. Those southwestern houses look cool in the water, and they suit my fish tank.”

Duong has always had a knack for arts and crafts and made his first models when he was in elementary school.

“When I was in third grade I made this stilt house model from discarded cardboard boxes. That year I was the only pupil in the school to receive a certificate for being skilled in crafts,” he said.

He has completed vocational training in mechatronics, but said it was just to make his parents happy.
“Since I was little, I always knew I had artistic and creative tendencies,” Duong said.

It is these tendencies that not only make the exterior of the model houses look so good, but also the everyday objects inside. They are so lifelike they can easily be mistaken for the real thing.

From the clay water jars and clothes hangers on the porches, to the random bricks and used tires lying on the roofs – every little detail is fine tuned to perfection, portraying the rustic lifestyle of people in the Mekong Delta region.

Since Duong has never seen any of the houses in real life, he looks up images online first then lets his imagination fly.

“I browsed the internet and picked the style I liked, and then I made the first model based on it. After I finished the first one, I came up with ideas to make another one, and another one, until I got an entire row of houses,” he said.

Over two months of social distancing, Duong has created more than 10 models. All of them were made from affordable materials that he either bought online or picked up at local workshops.

“All the materials are cheap. I used ice cream sticks, cardboard boxes, wood pieces, clay, and some foam sheets,” he said.

“My mum helped me get the cardboard boxes and other basic materials from her workplace, but the ice cream sticks I had to buy because I used a lot of them.”

Despite putting a lot of effort into the models, Duong said he only enjoyed the creation process and rarely felt satisfied with what he had done.

“I didn’t have any particular feeling when finishing one piece. I feel happiest at the beginning when I start making it. I felt really happy when I am in the middle of the process -- that is when I am most intrigued,” he said.

“People may find the models beautiful, but to me they are not really perfect. I think I need to do more.”
He has sold most of the models to fellow aquarists and only kept the first one he made since “it wasn’t very well-built”, but making money from the models is not what he wants to focus on.

“I’m not thinking about making them to sell right now,” he said. “I just want to do it for myself, and if someone finds them beautiful and wants to buy, I’ll be happy to sell them. But doing one model again and again and again to sell is not something I’m interested in.”

The young man wants to work on more miniatures to hone his skills and quench his thirst for creativity.
“With the same materials, I want to make more models that are distinctive to each province in Viet Nam, for example, floating markets, fishing villages, and a lot more,” he said. “That’s what I want. I’m not sure if I can make it happen.”

People are encouraged to send videos of their singing performances and positive messages to the non-profit music project Chạm - Sing&Share (Touch - Sing&Share) as a way to motivate the community to stay optimistic amid the pandemic.