Five veteran artists of thủy mặc (ink and wash) watercolour painting are introducing their works at an exhibition called Thái Mặc Niên Hoa (The Art of Ink and Wash).

The event, organised by the HCM City Fine Arts Association, is part of the association’s activities to celebrate International Women's Day on March 8.

Around 56 paintings are created by Truong Han Minh, Ly Tung Nien, Ly Khac Nhu, Huynh Tuan Ba and Truong Lo who are recognised as masters of the industry by art lovers.

All of the works were selected from the artists’ collections from different periods, featuring the beauty of Vietnam and its people. Highlighted works portray the daily life of people who live in remote provinces, seas and islands.

The paintings of Chinese-Vietnamese Minh have impressed viewers. He uses traditional Chinese ink techniques to portray Vietnamese objects and convey messages about life and love.

Minh was born in Chợ Lớn (Big Market) in HCM City’s District 5. He began his career in 1958 and has exhibited at 50 solo and group exhibitions in Vietnam as well as in France, the US, China, Japan and Australia.

He has sent 200 of his paintings to auctions for charity work for poor and disabled children.

Among highlighted paintings is a work featuring Ly Son Island, a famous tourist site in the central Quang Ngai Province, by artist Ba. The work, in black and white, portrays the natural and beautiful view of seas, trees and boats on the island.

The show, open from 9am to 6pm, will close on March 7 at the association at 218A Pasteur Street in District 3. VNS

Vietnam’s landscapes and lifestyles are topics of ink wash paintings on display at the HCM City Fine Arts Association to mark the 74th anniversary of National Day, September 2. 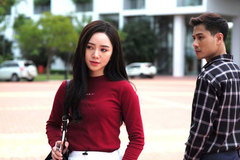