People’s Artist Kim Cuong (second left, back row), who has 65 years of experience in Vietnamese theatre. Photo courtesy of the artist)

“Cai luong, a reformed theatre genre of the southern region, is still alive after one century. My younger colleagues and I have worked to expand our art among young people,” said People’s Artist Kim Cuong in HCM City. 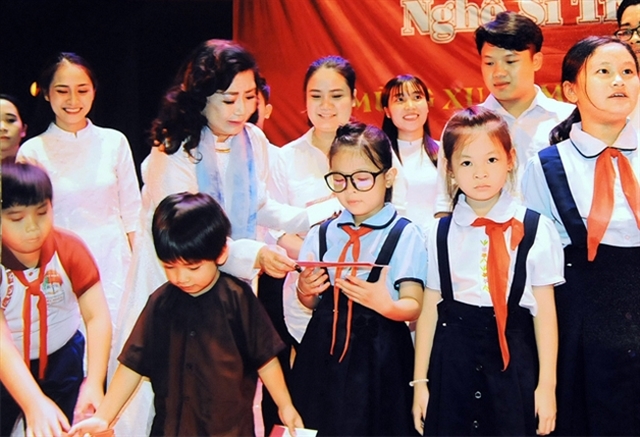 People’s Artist Kim Cương (second left, back row), who has 65 years of experience in Vietnamese theatre. Photo courtesy of the artist)

Cuong, a cai luong guru who has 65 years of experience in the industry, will release a CD featuring her biography on Youtube next week.

Her CD, Song Cho Nguoi, Song Cho Minh (Live for People, Live for Myself), written and recorded by Cuong in co-operation with her friends, will feature the artist’s life and career.

The development of the traditional theatre, between the 1950s and 1990s, in the south will also be highlighted.

"I hope my CD will help fans understand why and how cai luong is the spirit of Vietnamese people," said the 83-year-old artist, who has spent several hours daily in studio to complete her CD.

Born in 1937 to a theatrical family in Sai Gon (now HCM City), Cuong began her love for cai luong through her parents, the late talented performers Nguyen Phuoc Cuong and Bay Nam, owners of Dai Phuoc Cuong Troupe, one of the region’s leading cai luong troupes.

She started her professional career when she was 17, after training with her mother, Bảy Nam, and actresses Phùng Ha and Nam Phi, who are recognised as some of the most talented performers in the country.

In the 1960s, Cuong became involved in modern drama, working to combine it and cai luong.

She later opened Kim Cuong Drama Troupe, the first and leading drama troupe in the south, managing a staff of more than 70 actors.

Cuong decided to challenge herself as a scriptwriter and became a phenomenon in the industry in the 1960s and 1970s.

All of her plays feature the culture and lifestyle of southern people.

Three of her most famous plays are La Sau Rieng (Durian Leaf), Duoi Hai Mau Ao (The Colours of Clothes) and Bong Hong Cai Ao (A Rose for Mother), released in the 1970s-80s. These works are still fresh and have been staged many times by leading drama troupes across the country.

Do Kim Thoa, a journalist specialising in culture who worked for the Vietnam News Agency in the 1980s in Hanoi, said: “Vietnamese drama exists in two styles, from the north and the south. Each style requires specific performance skills.”

“Cuong used cai luong, a reformed theatre, to make drama, a new and imported form, in the southern style popular, even among people in the north.”

“Her devotion to Vietnamese theatre is invaluable,” she added.

Cuong wrote 50 plays during her career, most highlighting southern women and their characters. She also performed in more than 30 films.

In her CD, Song Cho Nguoi Song Cho Minh, Cuong will share her memories of famous performers of cai luong, including late People’s Artist Phung Ha and Bay Nam, her mother, who were pioneers and played an important role in developing the art.

Although the work does not focus on the love, challenges and sacrifices that Cuong has spent on cai luong, she hopes theatre lovers will learn more about the art and Vietnamese culture.

“My love for theatre keeps me healthy. I have been launching concerts to raise funds for the poor,” said Cuong, former deputy chairwoman of the HCM City Association in Support of Disabled People and Orphan Children.

“Our artists performed for free to encourage organisations and individuals to contribute to charity,” said Cuong.

Her programme received clothes, food, and cash worth VND1 billion (US$45,000). The proceeds wen to 160 poor theatre artists and their family.

Despite its recent success, the cai luong (reformed theatre) market needs more young scriptwriters now that the number of skilled composers is decreasing.