Every October, the Cham ethnic minority from around the country, particularly those in the south-central province of Binh Thuan, celebrate the Kate Festival -- one of their biggest and most unique cultural activities.

The festival features a host of activities and ceremonies at ancient towers, with traditions including ancestor offerings, musical performances, and the signing of hymns praising kings who were prominent in the building and development of the Champa Kingdom and the Cham people. 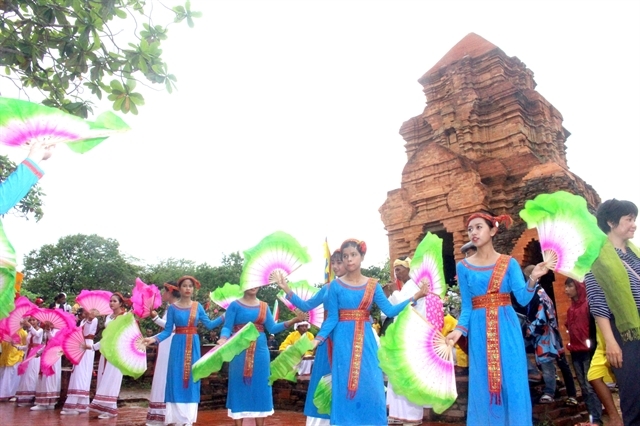 Thousands of local people and tourists got together at the Po Sah Inu Tower in Binh Thuan’s Phan Thiet City in mid-October to attend this year’s festival.

The venue is a group of temple ruins of the ancient Kingdom of Champa, on Ba Nai Hill in Phu Hai Ward, about 7 km northeast of the centre of Phan Thiet.

Built 1,200 years ago, the attraction of this and other towers lies in the sophistication of their unique architecture and the art of the ancient Cham people. There are, however, only three towers that have stood the test of time -- the main tower, the medium tower, and the small tower.

Early in the morning of the first day of the festival, religious dignitaries of Brahmanism and a large number of Cham attended a procession to the tower dressed in Pô Sah Inư Goddess costumes.

The procession took place through large crowds and to the sound of drums and trumpets amid graceful fan dances. It extended from the courtyard to the main tower and was followed by an opening ceremony at the tower gate, Linga-Yonialtar washing and dressing up, and another ceremony at the main tower.

The ritual ceremonies and cultural activities of the Kate Festival are held to remember the gods and pray for good weather, bumper harvests, and a happy life for all.

Therefore, at every Kate Festival, Cham people present offerings and wish for health and happiness. The Cham from all over the world return home to be with family and friends.

Following the rituals were various folk games bearing the cultural characteristics of the Cham, such as walking on stilts, rice grilling, and carrying water up and over barricades.

Visitors can also participate in such games as well as many other activities, to learn about the characteristics of traditional Cham craft culture as well as temple and tower architecture.

Dang The Mung, a visitor from HCM City, said this was the first time he had attended the Kate Festival but was very impressed with the culture on display.

“I felt quite excited being emerged in these cultural activities,” he said.

Deputy Director of the provincial Sports and Tourism Department, Vo Thanh Huy, said Kate is one of six typical festivals chosen by Binh Thuan authorities to help with tourism development.

“After 15 years of restoration, the Kate Festival not only meets the spiritual needs of the Cham, but also contributes to promoting the culture and image of Binh Thuan among tourists in the country and around the world,” he said.

This year’s Kate Festival held special meaning, as it also celebrated the success of the province’s 14th Party Congress, and was also part of a range of events celebrating the 25th Binh Thuan Tourism Day, on October 24.

The annual festival is held from the 30th day of the sixth month under the Cham calendar to the 2nd day of the 7th month. It usually falls between the end of September and mid-October on the solar calendar.

It’s also an occasion for local people to take in traditional artistic performances by the Cham, such as Apsara dances, Ginang and Paranung drums, and Saranai trumpets.

The Kate Festival has been recognised by the Ministry of Culture, Sports and Tourism as an intangible cultural heritage, and the annual event is a venue for the Cham to express their gratitude to kings, mandarins and ancestors.

The first day of the festival often begins with a thanksgiving ceremony.

On the second day, the Cham present offerings to their kings at ancient temples and pray for a peaceful and happy life. From the third day onwards, they celebrate at home and honour their ancestors.

Kate is the Cham people’s most important festival and one of the 15 largest in Việt Nam, attracting thousands of local people as well as domestic and international visitors every year.

Binh Thuan is currently home to some 39,600 Cham people, primarily in the districts of Tuy Phong, Bac Binh, Ham Thuan Bac, and Tanh Linh, with Brahminism followers numbering around 18,000.

In recent years, the policies of the Government and the province to boost investment in the development of ethnic minorities in mountainous areas, including the Cham, have helped improve lives in rural areas all around Binh Thuan.

Vietnam creativity and design festival to return next month

The Vietnam Festival of Creativity & Design 2020 will take place from November 7 to 22 to celebrate Vietnamese creativity through a series of online and offline activities.

The match between Vietnam and Australia in the final round of the 2022 FIFA World Cup Asian qualifiers at the My Dinh National Stadium on September 7 will be played without fans in attendance as planned before.